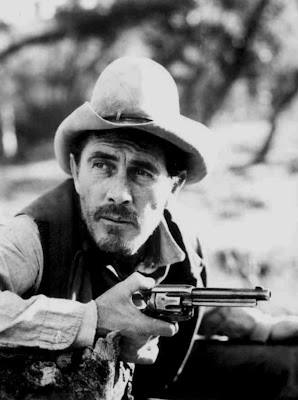 Caught a great episode of Gunsmoke today. It featured Festus (Ken Curtis, who was an absolute doll and a wonderful singer) but guess who the guest stars were: Denver Pyle, Dub Taylor, and George Lindsay. It was priceless! Goober (George) was a gunslinger; Dub was a bartender; and Denver was a doctor. Supposedly, Festus was bitten by a rabid dog and is mistaken for a hired gun. Brilliant! Ken had a beautiful singing voice. For proof, visit:
http://www.eviltwin.velvetsofa.com/Curtis/main.html

When we had dinner with Buck Taylor a while back, I mentioned that even though I had a crush on him when he was playing Newley, Ken Curtis was really the best-looking guy on the lot. He was not offended.

Ken was born in Lamar, Colorado, and when he died, his ashes were scattered on the high, flat, plains.
Posted by Deb Goodrich at 6:49 PM

Wow! I am really impressed. I never knew that about old Festus!

Did you listen to his music? Isn't it wonderful? He was with the Sons of the Pioneers for a while.

Yes, I did listen to his music. Wonderful singing voice. My dad has a bunch of old Sons of the Pioneers albums, I'll have to see if he is on any of them.