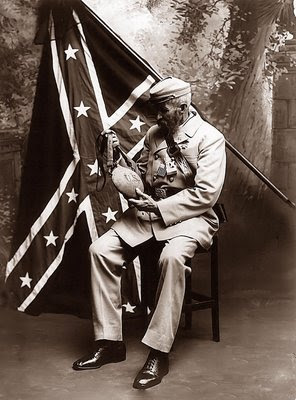 Byron from Tennessee reports that all of Knox County has the hacking, hocking, malady from which I have been suffering. Sales of moonshine must be through the roof! "Government liquor," as Grandpa called it, just doesn't have quite the same medicinal quality. . . .


Major Melissa Tune, currently assigned to the Army's Command and General Staff College, is also a TV personality in Augusta, Georgia. She recently interviewed my bud LTC (ret) Ed Kennedy and myself for a special segment on black Confederate soldiers. Also weighing in on the discussing was Ethan Rafuse, from the CGSC's history department. She did an overview of of the subject as well as another story on the removal of a Confederate soldier's headstone in a Missouri cemetery.


It seems that someone called the cemetery claiming to be the descendant of John Noland, a black man who rode with William Clarke Quantrill. The descendant said that Noland was neither black nor Confederate and asked that the stone be removed. Actually, both Noland's race and his service are fairly well documented. Police were called and the incident is under investigation, but let me assure you, the local Sons of Confederate Veterans are outraged that a mere phone call could uproot a memorial marker.


While Tom and I were researching The Day Dixie Died, we stopped in the Augusta Public Library and were reading old newspapers on the microfilm. A black woman and her daughter sat next to me to work on a school project. Being unfamiliar with the machine, the lady asked me if I could help her thread the film. I hoped she wouldn't notice that on my screen was an ad for a slave auction in Augusta, in mid-April 1865. Listed for sale was a girl about the age of her daughter. I was so overcome I had to bite my lip to control my emotions.


And, lest any of you doubt the experts at my beck and call, this email from Col. Kennedy describes the photo at the top of the page:
Deb,

Deb-
Love the photo with this post. What great detail that we can see. WOW. I love it, makes you want to know the man's name and what he experienced. Isn't it great when we know who is in the photo so we can help them speak again! Hope you and Tom are feeling better. Was warm here all weekend and now it is storming something terrible. Think this is a sign of a wicked, wicked spring.