Is It March Already?

My God, where did February go?

There are so many things coming up, I hardly know where to start. 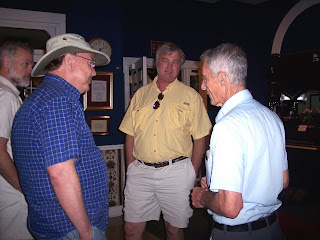 Got our Pony Express Mail from the Patee House, St. Joseph, Missouri. Their 150th anniversary dinner is set for April 12 in the newly renovated grand ballroom. Tickets will be $25 each with the social hour being held in the Buffalo Saloon at 6 p.m. Email patee@ponyexpress.net for more information. Much of the success and survival of the Patee House is attributed to Gary and Mary Chilcote who have devoted most of their married lives to this historic site. The Chilcotes celebrate their 50th wedding anniversary at the Patee House on March 30. Their son, Doug, daughter, Carolyn, and granddaughter, Hillary, have made the Patee House their obsession as well. We all reap the benefits of their hard work and dedication. Happy Anniversary, Gary and Mary! (Above, right, Gary on the far right, visits with our tour goers at the Patee House.) Other anniversary events will be held throughout the year so stay tuned.

From Scott Porter, Command and General Staff College, per my inquiry: 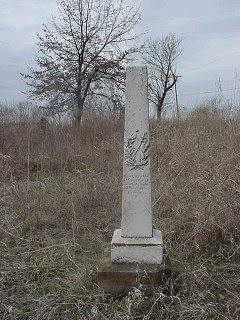 "Action at Camden Point: 1864" is the Fort Leavenworth Historical Society monthly presentation at the Frontier Army Museum. On 20 March, it starts at 7PM. On 22 March, we will rally at the same museum at 0900 and drive to Camden Point. At Camden Point ,we will tour the battlefield and the Confederate Monument (right). Ed Kennedy will be in his Confederate uniform and discuss the weapons used during the battle.

Another bud is speaking this Saturday, so plan accordingly! Jay Jackson, local historian and superintendent of the Missouri City Schools, will be addressing the William C. Corum Chapter of the Sons of the American Revolution. They meet at 9 a.m., Saturday, in the Pryor Leadership Center at William Jewell College in Liberty. Jay will discuss the Liberty Arsenal, which is thought to be the site of the first Civil War action in Missouri. The breakfast meeting is open to guests. For more information, call 816-781-0614.
_______________________
Topeka SCV

And on Saturday morning, March 15, I'll be speaking to the local Sons of Confederate Veterans here in Topeka. The meeting is held at Westside Christian Church, 6th and Lindenwood, at 10 a.m. It is interesting, free, and Denver Erickson's wife sends cookies.

On March 29, the Missouri Sons of Confederate Veterans are having their annual meeting in Blue Springs, Missouri, and our friend, Ed Kennedy, will be speaking on Black Confederates. Email me for more details on any of these events.

On April 18, our friends Doug Scott and D. K. Clark are among the presenters at the Denver Custer Symposium.

Topics and speakers include: Eli Paul, "The 1854 Grattan Fight: Prelude to Blue Water Creek"
Ron Nichols, "The Hilltop Fight: Was Reno in Command?"
Paul Hedron, "The Scourge of Alcohol in the Old Army: Case Studies from the Black Hills Road in 1876"
Doug Scott, "Custer's Heroes: The Little Bighorn Medals of Honor in the Context of the Indian Wars"
Lori Cox-Paul, "A Frontier Army Fourth and Other Holidays"
Dennis "DK" Clark, "The Lost Site of Beecher's Island" 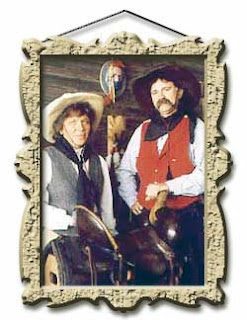 . . . arrived in the mail a few days ago. The "Official Publication of the Cockeyed Old West Band of Yahoos Society" is published in Ellsworth, one of the state's wickedest cowtowns by the historic cowboy himself, Jim Gray. Jim and his wife, Kassi, operate Drover's Mercantile in downtown Ellsworth and they're the real deal. They ain't just playing cowboy, they walk the walk. Well, mostly Jim tells tall tales but that's a big chunk of COWBOY life! Visit them in Ellsworth or online at http://www.droversmercantile.com/. We ran into Jim and Kassi in January at the premier of Bloody Dawn in Wichita. It's always good to see good folks and we just don't get enough of an opportunity. Jim commented that watching Bloody Dawn was "like Old Home Week cuz jest about everybody in the film was someone that had crossed our paths at one time or another." I agree. We live in a small world, spread out though we be.

Kassi and Jim (left) host the annual "Spring Gather" April 21 - 23, and if you're hankering for a taste of the real cowboy life, this is your chance. Tell them we said "hey."
Posted by Deb Goodrich at 9:19 AM