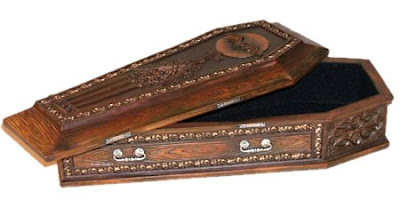 This personal story of a preacher was shared by my sister-in-law, Scarlett. In the words of the Reverend himself:

As a young minister, I was asked by a funeral director to hold a graveside service for a homeless man, with no family or friends. The funeral was to be held at a cemetery way back in the country, and this man would be the first to be laid to rest there. As I was not familiar with the backwoods area, I became lost; and, being a typical man, I did not stop for directions.

I finally arrived an hour late. I saw the backhoe and the crew, who was eating lunch, but the hearse was nowhere in sight. I apologized to the workers for my tardiness, and stepped to the side of the open grave, where I saw the vault lid already in place. I assured the workers I would not hold them up for long, but this was the proper thing to do. The workers gathered around, still eating their lunch. I poured out my heart and soul. As I preached the workers began to say "Amen,""Praise the Lord," and "Glory"!

I preached, and I preached, like I'd never preached before: from Genesis all the way to Revelations. I closed the lengthy service with a prayer and walked to my car. As I was opening the car door and taking off my coat, I overheard one of the workers saying to another, "I ain't never seen anything like that before and I've been puttin' in septic tanks for twenty years."
_________________________________________
Flipping Houses
Cheryl and I are holding open house today from 2-4 at 130 NW 62nd Street, which is east of Topeka Blvd. This is a beautiful walkout ranch with 4 bedrooms, a large concrete drive, covered deck, 3 acres and a lovely view. Come see us!
Posted by Deb Goodrich at 10:35 AM