Remember the greeting card a few years ago that featured CSI Topeka? The cop looks at the body and declares, "Bored to death!"

We can't begin to squeeze in all the events--art, music, festivals, fairs--going on in and around Topeka. Two I'd like to highlight today: Wheatstock VI, June 12, and the Great Overland Station Gala, June 18.

Good friend, Doug Ruth, is the instigator behind Wheatstock. Doug is a treasure. He works long and hard to document and promote local music. His website, topekatonight.com, is topnotch and is full of photos, bios, schedules and comments. This year, Wheatstock moves to Old Prairie Town at Ward Meade Park, thanks to another good friend, John Bell. John is the program director at this Topeka landmark and does such a great job keeping Old Prairie Town alive with quality events. For the details and lineup of Wheatstock, visit Wheatstock VI moves outdoors | CJOnline.com

Among the entertainers is the High Falutin' String Band, pictured above, featuring Chris Frost, Tom O'Brien and Stuart Yoho. If you haven't heard them, you are in for a real good time! (Note the emcee for this auspicious occasion!)

The Great Overland Station is another jewel in Topeka's crown. Across the Kansas River from Old Prairie Town (no accident, these locations; that's a story for another day). I am so thankful that the stars aligned and that Beth Fager had a passion for restoring the Union Pacific depot before it was lost to time and the elements. Beth emailed yesterday to say that tickets will be available until Friday (June 12) for the June 18 event.

Honorary Chair, Governor Mark Parkinson, Commander of the Kansas National Guard, invites everyone who supports America's military to attend the "Red, White and Blue Gala: Celebrating Our Heroes." Beginning at 5:30, all proceeds will benefit the operations of the All Veterans Memorial and Great Overland Station.
Medal of Honor recipient Col. (ret.) Donald Ballard is the guest of honor and speaker. 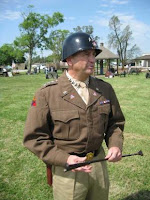 Roger Aeschliman (left, cjonline photo by Steve Fry) will present "General George Patton: Apology to the Troops", and the Laudate Ringers will perform "America the Beautiful" and "Stars and Stripes Forever". WIBW General Manager Jim Ogle will serve as Master of Ceremonies. The special exhibit "U.S. Armed Forces Around the World" will be open throughout the evening in the Fink Exhibit Gallery. 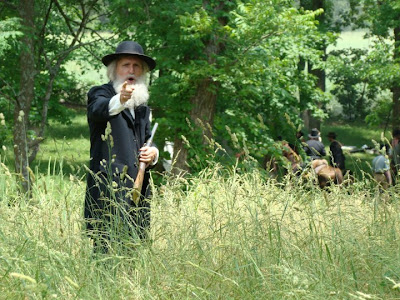 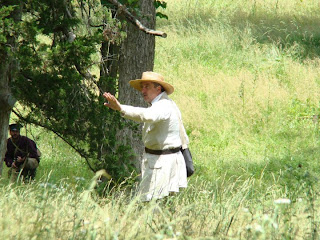 Soooooo good to see old buds at Black Jack on Saturday! The Friends of the Battlefield worked so hard and did a tremendous job putting on a long and quality event. Kerry Altenbrend, above, portrayed John Brown for the reenactment of this 1856 confrontation that many historians (myself included) consider to be the first battle of the Civil War. Also in fine form, my friends Greg Higginbotham, below right, and Dan Hadley, left. (These boys are really outstanding in their fields, aren't they?) 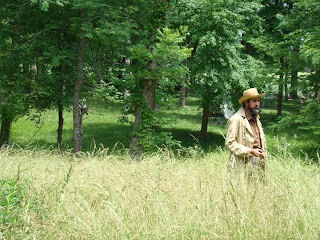 Attendance was well over a thousand for the day's events.

From Freddy the Plumber back in Mayberry: 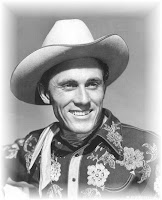 Did you know- Ken Curtis/Festus was lead singer for the Sons of the Pioneers???

Why, of course I did! Thanks for the link and the opportunity to share that tidbit with others who are less informed. I do happen to be one of the biggest fans of Ken Curtis (right) who died in 1991. In fact, when I had the opportunity to have dinner with Buck Taylor a couple of years ago (Newly from Gunsmoke), I told him, "You were cute but Ken Curtis was really handsome!" Buck generously agreed.

From Rick Herrera on the road in London:

A WWII battlefield untouched since 1942. An absolutely amazing story!
http://news.blogs.cnn.com/2010/06/07/lost-wwii-battlefield-found-war-dead-included/

Keep the cards and letters coming, folks! Surely, my friends are the most interesting and creative people on this planet!