Tomorrow, December 10, is the birthday of two unforgettable faces, and voices, from my childhood. Though both men are long gone, what they represented to me, and to millions of others, yet lives: 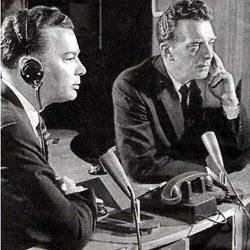 "Goodnight, Chet; Goodnight, David," was the catch phrase of the 1960s. A child of that decade, I sat glued to the news, though I thought it boring, because of Chet Huntley. He looked like my Grandpa Bowman, and he commanded attention and authority the way Grandpa did.

Huntley was a "western man," born in Montana to a Union Pacific railroad dad; born, in fact, in the UP living quarters in the hamlet of Cardwell. I believe his personality and values were shaped by the West.

“[I used to believe] the government was the answer to all our problems. But the . . . government, I've concluded, is now an insufferable jungle of self-serving bureaucrats.”*

and, the quote that every school of journalism should post over its front door,

“Journalists were never intended to be the cheerleaders of a society, the conductors of applause, the sycophants. Tragically, that is their assigned role in authoritarian societies, but not here -- not yet.”*

Huntley died in Montana at the age of 62. I wish I had met him, but I knew him, valued him, and think of him still.

It is unimaginable to me that Bonanza could not be a part of your personal lexicon of American culture. I loved this show, and sent cereal boxtops in to General Mills to receive my own color photo of the stars, including Dan Blocker who played the lovable Hoss Cartwright.

Hoss was big, good-natured, noble, dependable, generous--and, though not the most handsome of the Cartwright men, the most irresistible. Those who knew Blocker say he possessed those same qualities in spades. He commented that he played the character with this quote in mind, "We shall pass this way on Earth but once, if there is any kindness we can show, or good act we can do, let us do it now, for we will never pass this way again." ("Bonanza", Bear Family CD Collection liner notes) The enigmatic Texan was an English teacher, a bouncer, and a rodeo performer before heading to Hollywood. A Korean War veteran, he opposed the war in Viet Nam.

Let us recall the lives of these two Westerners with gratitude for their lasting contributions to our society and the integrity which marked their time on this earth. 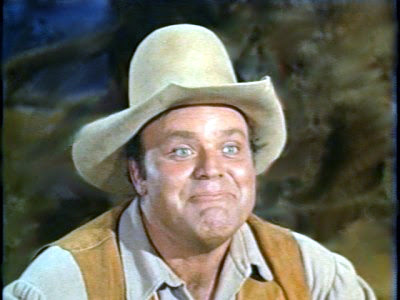 *Chet Huntley quotes from Thinkexist.com
Posted by Deb Goodrich at 9:43 AM