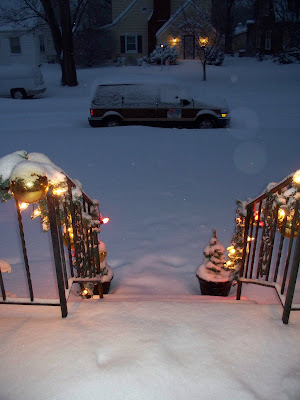 No, we haven't shoveled the sidewalk nor have we shoveled the steps. Gary did so a couple of weeks ago when we had the big snow and his back has hurt ever since. With the way this snow was blowing, it really wouldn't have mattered anyhow. That being said, I may get out and move some white stuff around today. Maybe.

The internet is never more miraculous than when one is snowbound. Last night, we poured a couple of glasses of wine and I wanted Gary to hear "Breaking Up Christmas," an NPR production by my old friend, Paul Brown. There are sound clips on Amazon, so check it out. One of the clips included Eleanor Coleson. Eleanor was married to my cousin, Jess. I loved Jess and Eleanor. Hearing her voice just caused me to choke up unexpectedly. Hearing Uncle Tommy Jarrell sing always does that. There are so many recordings and film snippets of Uncle Tommy. But Benny, his son, is on this album as well. Bless you, Paul, for keeping them alive!

"Breaking up Christmas" comes from the tradition of going from home to home each night from December 25 to January 6. (Granny did not call this night Epiphany; she always referred to it as "Old Christmas.") So folks played and sang and danced and broke up Christmas. This is the tradition I so wish to revive!

Dear friend, scholar and historian, Arnold Schofield, has written a wonderful article in the Fort Scott Tribune on Christmas during the Civil War. Check it out at http://www.fstribune.com/story/1597453.html 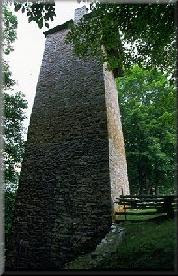 On this day in 1836, Stephen F. Austin, father of Texas, passed away. He was 43 years old and Texas barely a Republic. The blood still stained the ground of the Alamo from that March. Sam Houston still roared like a lion.

Stephen F. Austin, I never tire of reminding people, was a Virginian. Read my post from March 5, 2007, for more on this beloved figure. At right, the Shot Tower, which stands on the banks of the New River, near Austinville, Virginia. Austinville, Stephen's birthplace, was the home of the lead mines that furnished the materials for the shot made in this massive structure. Austinville was named for Stephen's dad, Moses.

The railroad track that runs by the river, just below the tower, has been converted to biking/hiking trails and is glorious. It leads to Fosters Falls, also a state park now. When I was younger, it was still private property but we knew folks with access to it and Fosters Falls was my refuge when the world became too much.

The image below is Wytheville (pronounced with-vul or, wifful), Virginia, earlier this month. Wytheville is the county seat of Wythe County (which includes Fosters Falls and Austinville). Isn't it lovely? Somebody sent me a snow/frost/ice photo of Fosters Falls, would you, please? 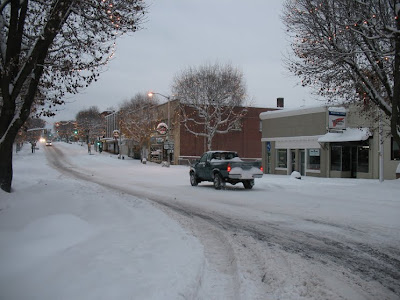 Well, while it's not fun to shovel it certainly is pretty to look at!

It's beautiful, and it's doing it again! Happy New Year, Wyatt!