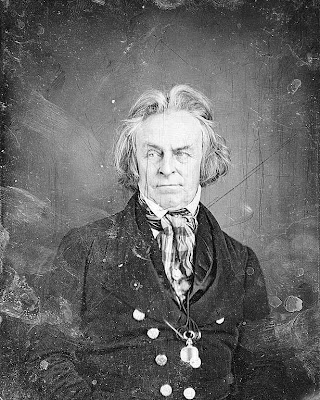 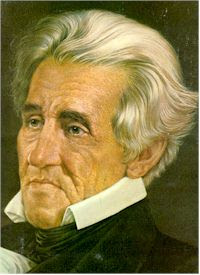 On this day in 1828, Andrew Jackson and John C. Calhoun (above) were elected president and vice president.

What did they have going for them, you might ask? Hair, I might answer, rather, unruly hair. Obviously, these guys were not concerned about the tv cameras. Jackson and Calhoun walking down the street together would have scared small children. Can you imagine them on Meet the Press or the evening news with Katie Couric?

Also, both men had the reputation for being outspoken. Oh hell, that's putting it mildly! Jackson, of course, is noted for his response to the Supreme Court who sided with the Native Americans and against Jackson on the question of Indian Removal.

"Let'em enforce it!" said Jackson of the decision, as he proceeded to do exactly as he pleased.

You know though, in these days where wishy-washy politicians say anything to get elected, get ahead on their looks (ala John Edwards), and never back up what they say with their actions, I find myself longing for a world before Prozac and television.
Posted by Deb Goodrich at 9:52 AM