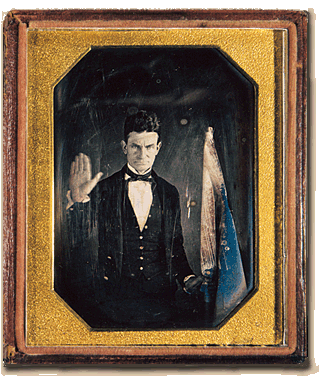 On this day in 1859, Abraham Lincoln was in Leavenworth, Kansas, on a speaking tour that many believe was the warm-up act for his presidential campaign. While there, he received the news that John Brown had been hanged in Charlestowne, Virginia, for treason, murder, and conspiracy. Lincoln chose his words carefully, and said while we may sympathize with John Brown's goals, we cannot condone these acts of violence.

Oh, to have read Lincoln's thoughts! Did he have any idea that this was the spark, the spark that would take us into the bloody Civil War?

Lou DeCaro has a great blog on this same server: http://abolitionist-john-brown.blogspot.com. His commentary Sunday was excellent, a discussion on the possible pardon of John Brown and why he does not support it. Honestly, I am odds with Lou on many issues, though I respect him greatly. On this one, I think he is right on every point. While you're there, click on the priceless footage of Johnny Cash's portraying John Brown from the mini-series North and South.

There is a great article on HistoryNet.com by Robert E. McGlone, "The Madness of John Brown." I believe this first ran in Civil War Times. It's excellent.

Tonight, Prof. Jonathan Earle is speaking at the Brown v. Board site here in Topeka. A new portrait of John Brown will be unveiled. I'll share photos later.

As my friend Jack Davis so succinctly said, "John Brown is simply a mountain in the path of American history. You simply cannot go around him."
Posted by Deb Goodrich at 11:15 AM