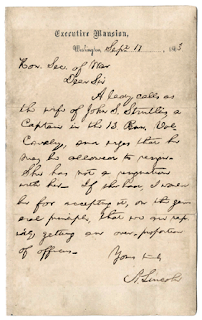 From Antiques and the Arts Online:

R.M. Smythe & Co., Inc, held one of the most successful autograph auctions in its 125-year history on January 17. The sale, featuring the collection of Steven Lee Carson, saw more than 75 percent of the offered lots sell; and, in the end, bidders on the floor, on the phone and at their computers were able to take home a remarkable variety of historical autographs and Americana.

Not surprisingly, the highest hammer price was achieved by a letter written by President Abraham Lincoln, asking Secretary of War Edwin Stanton to approve the resignation of a cavalry captain at the request of the officer's wife. Lincoln, typically a "soft touch" in such cases, makes the argument that "we are rapidly getting an over-proportion of officers." The letter sold for $16,675. 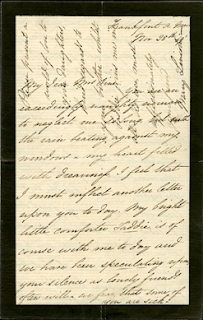 Keeping it in the family, a pair of 1869 letters (one incomplete) from Lincoln's widow, in which she refers to him as having been "from my eighteenth year — Always — lover — husband — father and all, all to me — truly my all," brought $14,950.

We were on the same seminar schedule with Steven Lee Carson a couple of years ago and enjoyed him so much. Steven Lee has delivered addresses in The White House, The Kremlin, The U.S. Capitol, The Lincoln Memorial, Ford's Theater, The Smithsonian Institution, The National Archives, The Library of Congress, The Belfast (Northern Ireland) Parliament, over the Voice of America and throughout the United States. Most of the famous personalities covered in his speeches include the celebrities he has dealt with at The White House or as a member of The National Press Club. I enjoyed his stories immensely. What an incredible collection he has sold!

From fellow blogger, Byron, comes this link for Hillbilly Savants, a great site.http://hillbillysavants.blogspot.com/2008/02/whats-in-stereotype.html. Seems lots of folks are in an uproar over the prospective film depicting West Virginians as albino and hunchbacks.
Posted by Deb Goodrich at 10:20 PM