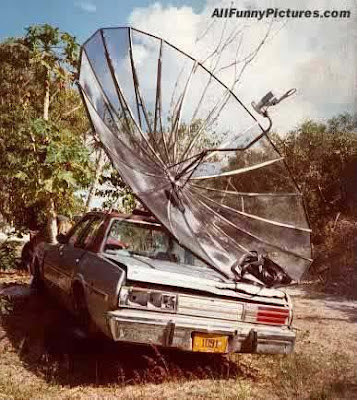 As bizarre as the photo above is, it doesn't come close to matching this news story. When I read the headline, my first thought was, "where in the South did this happen?"
Although this is a tragic story, we all know it's just not likely to happen ANYWHERE in the world but the American South. A man in Sedalia, Missouri, was trying to install a satellite dish. Having tried several times to make a hole in the wall, he fired a .22 handgun through the wall in order to run the wire. The bullet struck his wife in the chest and she died. The investigation is continuing and no charges have been filed.
__________________________________
George Hamilton IV
to Perform in Tobaccoville

Buford Kegley is interviewing George Hamilton IV on WBRF Radio, Galax, Virginia. Buford and George will be appearing Saturday night at Turner's Opera House in Tobaccoville, North Carolina. These days, George is probably more well known internationally than locally, but some of my first memories are sitting in front of a small black and white TV watching George on the Arthur Smith show. Before I started school, George's version of "In The Early Morning Rain," touched a chord in my soul. George grew up in Winston-Salem, North Carolina, born to Moravian parents. His dad was vice president of the company that made Goody's headache powders. I have a package of said powders in the cabinet now.
I get so homesick sometimes!
_______________________________
Thoughts from the Net

. . . . Back before there were so many television shows, the preacher could often catch the attention of the audience with reference to the episode of "Gunsmoke" that showed the night before, confident that most had seen it. . . . Rev. Everett Wilson
Posted by Deb Goodrich at 8:52 AM