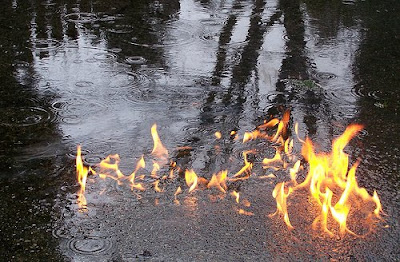 I try to edify, dear reader. I look for events or people that I feel will add value to your life someway. Sometimes, the blog becomes something of a journal of my own life, which is neither good nor bad as long as it is relevant. Today, it will be a cross between a sermon and a journal, and I hope you find comfort or edification or encouragement. Forgive me if it is too personal.

Those of you who are closest know that this has been a tumultuous year--or two or three or five, truth be told. Lots of changes: new relationships, new losses.

I awoke shortly before 2 a.m. Thursday morning to a smoke-filled bedroom. I woke Gary and from there time lost all meaning except that his mother's funeral was at 10:00 a.m. and he was supposed to play piano and be at the church by 8:30. I think it was around 5 when the firetrucks left and said the smoke was clear enough for us to go back inside. The power was shut off and there was a gaping hole in the bedroom. A pile of debris in the yard buried my brand new knee-high boots. The cats, though terrified, were safe and so were we. I don't know what woke me up but the wall was bubbling and buckling and in a few minutes the ceiling above our bed would have been in flames.

Before I met Gary, I said never. Never again will I be married and I certainly won't get involved with someone who has a parent living. I've been through living with my mother-in-law through Alzheimer's and have buried parents and in-laws. I was done.

But I met Gary, and God put something new in my heart. Not long after we met, he took me to Lexington Place to meet his mother. She welcomed me with open arms because she could see I love her baby boy. She was becoming forgetful--I'm not sure she ever remembered my name, but it didn't matter. She held my hand and told me stories of Gary's playing the piano when he was five years old.

The night she died, I was holding one hand and his sister was holding her other hand. The thought kept coming to me, "Precious in the eyes of the Lord is the death of his saints." Mama had this carved on Granny and Grandpa's headstone. Gary's mother's death was precious and beautiful and humbling.

After the fire, Gary wasn't up to playing for her funeral, but he had played for her when it counted--on Christmas Day when she was there to hear it. She had her children with her, and her sister-in-law, Hazel. Hazel is a gentle little woman, like a little bird. They were a comfort to one another. And she had beautiful music from this gifted man she had brought into the world. (Below, Gary took this on Christmas Day: his Mom, Lois Bisel; me; his aunt, Hazel Luthi) 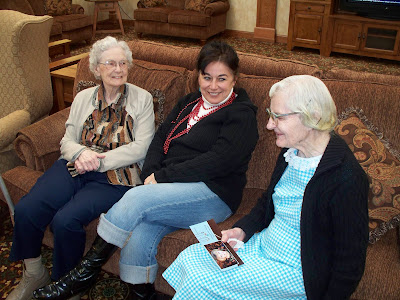 Yesterday, I was going through kitchen cabinets, washing and packing up dishes. I kept crying. This fire brought back memories of fires.

Our first house burned when I was 9 years old. We had gone to church, gone to the zoo, gone to visit friends. When we got home, there was no home. But there were people we loved standing around this charred, gaping hole waiting for us. They never determined the cause of the fire but did figure out it had begun in the attic. Perhaps a mouse had chewed a wire.

Our second house burned when I was 17. We had gone to church on the coast, so we left around 5 a.m. By 10 a.m., the house was totally destroyed. This was arson. There was a "firebug" in our community and he must have watched us leave. I can still remember watching Mama walk around the house again and again to make sure nothing was left on.

My third fire occurred as an adult. Daddy and I had remodeled a trailer he had bought and put on one his farms. It was adorable and it had so many precious things--quilts Granny and I made, needlework Mama had done, a pencil drawing done by Willard Gayheart of Uncle Tommy Jarrell. Lightning struck while I was at work and my daughter Karen was with Mama and Daddy. Thank God we weren't there asleep because in only 10 minutes it was totally engulfed.

When I awoke last Thursday to a smoke-filled house, Gary ran outside to see flames coming through the exterior wall. He was the one who saw the rolling, red, orange, yellow, fire eating the house. He grabbed the fire extinguisher and got that stage of fire under control. I never saw the flames. I never saw any flames of any fire that touched my life. I do have the unforgettable memory of the smell of loss, of helplessness.

I look for meaning in events. I look over these scenes and cannot help but think of the children of Israel in the fiery furnace. The flames did not touch them. But did the smell linger with them to remind them where they had been?

I don't know why my life, and the lives of my family, have been punctuated by fire. We all have different lessons to learn, different gifts. I know that God has been present throughout my life, and in the times of His choosing, He has given me insight and hope. He has given me, at this point in my life when I thought "never, never" an affirmation, a "forever."

Wow, that is very chilling. You can't imagine how often I sit in church and wonder if our home will still be standing when we get home, I've always feared that. I'm glad you made it out safely.