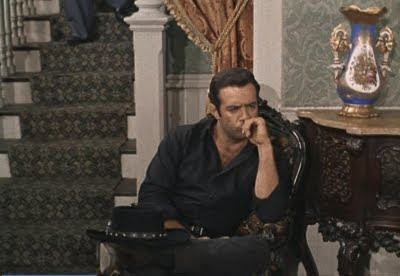 . . . sometimes gets in the way of blogging.
Pernell Roberts has died. WITHOUT A DOUBT, the handsomest of the Cartwright Clan, Pernell's Adam was my heartthrob each week as Bonanza blazed across the TV screen. And that voice! Rich as molasses and deep as Lake Tahoe. That voice came straight from the soil of Georgia and the good-looking actor was a singer as well. He was also an activist--an actor with a mind and a heart and a conscience.
While shopping at Walmart a couple of weeks ago (yes, Walmart, I hate to admit it, but Walmart), Noel and I began digging through the bin of $5 DVDs and lo and behold, there was Bonanza. This multi-DVD set included three episodes of Wagon Train. Is this a great country or what?

Upon putting this treasure into the DVD player, I found to my consternation that the original sound score is not part of this production. Some of my Hollywood buds are going to have to decipher for me exactly how someone has the ability to legally distribute a TV show without having the rights to music? Maybe Louis Kraft can weigh in on that one.

Pernell was the last of the Cartwrights to leave us. Pictured left with costar Dan Blocker, Pernell was somewhat critical of the TV show that made him famous and left to pursue avenues that provided greater range for his skills. He later starred in Trapper John, MD. He was a fine actor.
In honor of Pernell Roberts, several friends have already had "popcorn and classic TV night." I suggest you do the same. But maybe you should spring for the high-dollar version of Bonanza. Without the signature music, it's just not the same.
(Photos compliments of Bonanzaworld.com, a truly fantastic website for any of us Boomers who grew up with this show.)

. . . to Julia Dent Grant (January 26) a truly remarkable, decent, devoted woman. Not known for her beauty, Julia nonetheless possessed the qualities of a real lady. God knows, there's almost no comparison between her and Mary Lincoln whom she succeeded as first lady. Read Julia's memoirs. They are fascinating. Julia died in 1902 and her children lived well into the 20th century; a daughter-in-law lived until 1945. The past is not far behind us.