A hundred and fifty years ago today, Texas left the Union.

It had barely joined the Union. 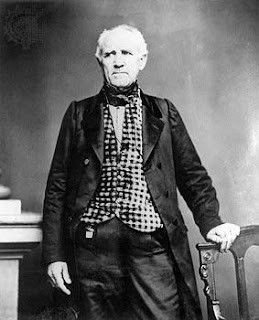 
It was a sad day when Texas voted to secede, just as it was a sad day when her sister states cast those votes. Even though some celebrated, others mourned the dissolution of the hard-won United States. The American Revolution was not that distant; the sons and daughters of patriots held the fate of the young nation in their hands. They did not not always decide wisely.


When Mississippi seceded in January, 1861, U. S. Senator Jefferson Davis concluded that his services were terminated. When he bade farewell to Washington, there was great excitement in the capitol. Crowds arrived by 7 a.m. and by 9, even the hallways and meeting rooms were standing room only.


According to his Jefferson's wife, Varina:


I . . . looked on this festive crowd and wondered if they saw beyond the cold exterior of the orator -- his deep depression, his desire for reconciliation, and his overwhelming love for the Union in whose cause he had bled, and to maintain which he was ready to sacrifice all but liberty and equality. We felt blood in the air, and mourned in secret over the severance of tender ties both of relationship and friendship. . . our hearts were "exceeding sorrowful even unto death."


May God have us in His holy keeping, and grant that before it is too late peaceful councils may prevail.

Of course, peace did not prevail Jefferson Davis was soon elected the head of a rebel nation. Probably not until death did Davis or Houston know true peace after that war had taken place.


The First Tycoon: The Epic Life of Cornelius Vanderbilt by T. J. Stiles won the Pulitzer Prize and the National Book Award. I came to know T. J. through his work on Jesse James. The result, Jesse James: Last Rebel of the Civil War, is well-researched and well-written -- both of which are woefully lacking in scholarship it seems. I have to admit I was tickled to read T. J.'s note. We were discussing the ridiculousness of some Jesse James lore:

By contrast with Jesse James, no one claims to have a family story about Cornelius Vanderbilt , or a picture of him that they want me to authenticate, even though Vanderbilt lived far longer, interacted with far more people, and was photographed many more times. If all the purported photos of Jesse James really were him, he would have spent every hour of his short life in front of a camera.


T. J., I've been meaning to ask you about this photo I found in an estate sale. I think it's Jesse James and Billy the Kid robbing a train with Cornelius Vanderbilt on board and John Wilkes Booth is a passenger . . . . Maybe I'll just take it to Rick at the Pawn Shop in Vegas. . . .


Check out http://www.thefirsttycoon.com/ and follow T. J.'s appearances and blog.
Posted by Deb Goodrich at 9:29 AM

Good to see new posts, enjoyed them tremendously, as usual.

Hey, did you notice I mentioned Varina? :)