The Civil War Through the Camera 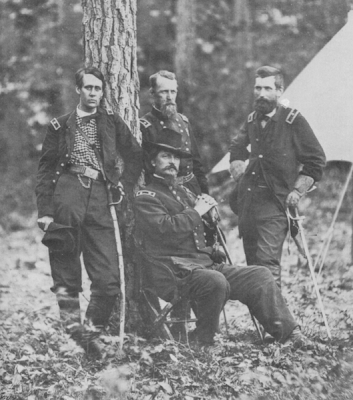 I couldn't sleep last night so at 2 a.m. I made a cup of hot chocolate and snuggled into my reading corner. It's one end of our music room, just a cozy nook with bookshelves, a wing-back chair, an ottoman, and a lamp. (There is also a considerable amount of art on the walls the focal point of which is a signed print of Don Griffiths' They Stood Their Ground.)
After moving the cat from the chair, I randomly picked a book I hadn't looked at in a while: The Civil War Through the Camera: Hundreds of Vivid Photographs Actually Taken in Civil War Times. This book was published in 1912 and contains so many compelling images that is almost sensory overload. From generals to common privates it presents the war in black and white detail.
Each image draws you inside their world. It has been said that the Civil War is so fascinating because it was the first to be photographed. (I'm not sure if that's true or not, but it was certainly widely photographed and images distributed throughout the North and South.)
This is an incredible book, a "black hole" of faces and figures from which you will never emerge. For the student of the Civil War, each page tells a multi-layered story from "Hancock the Superb" to "Confederate Soldiers in Virginia, 1864" the photos in this volume tell a story more eloquent than any historian ever wrote.
This one is a must-have.
From the book, the caption for the photo above:
Every man in this picture was wounded at Gettysburg. Seated, is Winfield Scott Hancock; the boy-general Francis C. Barlow (who was struck almost mortally), leans against the tree. The other two are General John Gibbon and General David B. Birney. About four o'clock on the afternoon of July 1st a foam-flecked charger dashed up Cemetery Hill bearing General Hancock. He had galloped thirteen miles to take command. Apprised of the loss of Reynolds, his main dependence, Meade knew that only a man of vigor and judgment could save the situation. He chose wisely, for Hancock was one of the best all-round soldiers that the Army of the Potomac had developed. It was he who re-formed the shattered corps and chose the position to be held for the decisive struggle.
Now don't you want to see/read more?
Posted by Deb Goodrich at 9:36 AM