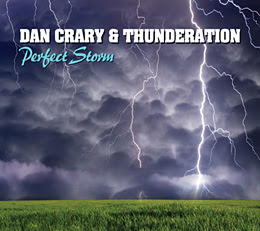 Perfect Storm may not be the appropriate title for Dan Crary and Thunderation's new CD. Perfect, yes. A storm, no.

A storm implies something chaotic, wild, and this CD has none of that. There is not a misplaced note anywhere. Everything is in perfect order, exactly where and when it should be.

I had the opportunity to sit down with Dan at the Walnut Valley Festival, Winfield, KS, a couple of weeks ago. Dan performed with Thunderation which is Steve Spurgin (another legend in his own right and longtime musical partner of Crary's) and Martin Stevens (a new and impressive talent). He also did a guitar workshop with Pat Flynn and Kenny Smith. The audiences' response bears out the fact that quite simply, Dan Crary is a guitar hero. A legend.

He wears it well. In fact, he is like a well -- deep, resonating, full, crystal clear. This CD is like that. It quenches the thirst like a dipper of water from a deep, deep well.

Sail Away Ladies, the first cut on the CD, has a special place in my heart. In a Mayberry far, far away, Uncle Tommy Jarrell and I sat in his living room and he took out his fiddle and played this tune for me--just for me. There was no one else in the room. It still brings tears to my eyes to think of his long arms holding the fiddle and bow and his crackly voice singing those simple verses. When Gary and I were married a couple of years ago, we chose Sail Away Ladies as our exit song because it is a happy, hope-filled song. Dan Crary's interpretation of this standard has given it a new life.

Dan said that he and Steve came to making this CD with songs they had each wanted to do for years, in the case of Deep River Blues, nearly 50 years. Dan and Steve began as folk singers and when he heard Odetta's version of this traditional tune, he knew he wanted to do it. It just took a while.

Steve Spurgin, an acclaimed songwriter in addition to being a fine musician, has a couple of originals -- Muley Was A Railroad Man and Tumbleweed Town. As Dan commented, Steve has a feel for Americana and these songs are strong examples. They have the feel of timeless tunes; if you didn't know better, you'd think you heard them as a child or saw them included in your reading book along with the Erie Canal and Ole Susannah. Listen closely to the words of Tumbleweed Town. The almost haunting lyrics are nearly disguised by the upbeat tune.

Covers of Gordon Lightfoot's I'd Do It Again and Bob Dylan's Girl From the North Country are really well done, with Dan and Steve trading lead vocals on these two.

The instrumentals, of course, are what you would expect from these guys -- perfect. Dan's Thunderation is sure to be a standard for generations to come and the interpretations of Shenandoah, Gold Rush, and Soldier's Joy will satisfy the most critical of listeners.

Dan commented that this group of musicians was perhaps the most satisfying of his career. In additon to Thunderation, performers are: Luke Dewhirst, Don Sternberg, John Reischman, and Keith Little.

This CD is going to be one that doesn't get put away. It's an added bonus that the CD cover features a stunning image of a prairie storm because it will be laying beside your CD player from now on. It's perfect, but it ain't no storm.

Check out localgrass.com, hosted by Kenneth Berrier and Linda Wright to listen to my full interview with Dan Crary, and watch for an interview with the grammy-nominated Steve Spurgin as well.

"Fill your canteens, boys! Some of you will be in Hell before night and you'll need the water!"