Philadelphia and the Civil War--Get it!

I can't think of anyone more qualified to write the history of Philadelphia in the Civil War than my dear friend, Andy Waskie. In fact, I am fairly certain that no one who lived through those tumultuous times could have covered it more thoroughly or with greater enthusiasm.


A passion for history brought Andy and his wife Carol together years ago, and it brought all of us together in a lasting friendship. I've had the opportunity to visit Philadelphia many times and to host Andy and Carol in Topeka as well. This past spring, Andy spoke on Gen. Edwin Sumner to an exuberant Topeka crowd, then Carol gave a riveting presentation on the paranormal side of Philadelphia history at a conference in Missouri. Gary and I enjoyed showing them the sites, including Harry Truman's home and library in Independence.


So, knowing Andy as I do, I would honestly endorse this book even if I had not read a word of it. I am that confident in his ability as a researcher and his passion for the subject, and that doesn't happen very often. Having read the book, however, I can say that I would highly recommend it even if I did not know the author.


We Southerners often think of the North, of northern cities, as untouched by the war. Richmonder Constance Cary visited Philadelphia not long after the surrender and was shocked by the normalcy and abundance, most of all, by how unmarked it was by the war. Only later did she realize that Philadelphians had their own scars, their own empty chairs, their own losses. (She would eventually become the wife of Burton Harrison, personal secretary to Confederate President Jefferson Davis.) As a Southerner with ties to the City of Brotherly Love, Constance Cary was not alone.

Andy refers to it as a "border city," lying almost on the Mason-Dixon Line. "The city lay closest to Southern cities such as Baltimore, Washington and Richmond, which would ensure a pivotal yet grim importance as a center of any Northern war effort and destination for troop transportation," Andy wrote.

One of its sons, John Pemberton, became a general in the Confederate army and returned to Philadelphia after the war. There were many divided loyalties, but the majority supported the Union. In fact, Philadelphia contributed 100,000 soldiers including Generals George Meade and George McClellan to the Union Army. (Though Southerners may be more apt to appreciate McClellan's contributions than Yankess.)


As the second-most populous city in the North, Philadelphia bore a great financial burden in the war effort. It rose to the occasion and manufacturing reached new levels of productivity in the cause. Despite Constance Cary's observations, every corner of Philadelphia was involved in and touched by the war -- from the railroad and navy yards, to the arsenals, to the forts, prisons and training yards, and sadly, to the cemeteries.


For avid Civil War readers, Philadelphia and the Civil War is yet another vital piece of the puzzle, well-researched and well-told. Buy it. Then read it. After that, let Andy know how much you learned and how much you enjoyed learning it. 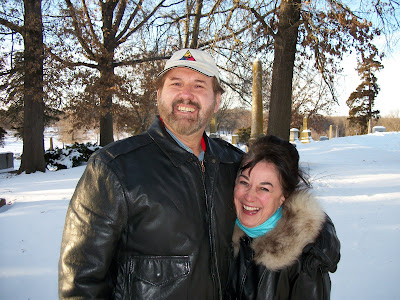 My indulgent husband Gary took this photo of Andy and me in Oak Hill Cemetery, Lawrence, Kansas, nearly two years ago. It was 0 and there was 18 inches of snow on the ground. It did not deter us from reveling in one of our greatest common passions -- dead people. My husband married me anyway.