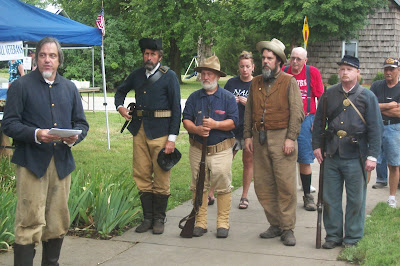 The battle of Lone Jack, Missouri, was immortalized by Rooster Cogburn in the
movie True Grit. It's where he lost his eye. This little detail, legend has it, was added by John Wayne, not the author, Charles Portis. The Duke apparently visited this quaint battle site and changed the location of the marshal's wound from Gettysburg to Lone Jack and then dubbed his cat "Sterling Price" after the Confederate general.

When the Lone Jack Historical Society marked the 149th anniversary of the battle, they unveiled a wall of honor for all veterans from the area. It was a day of ceremony and celebration, and Gary and I, along with fellow Topekan Beth Meyer, had a great time visiting with Jim Beckner, Greg Higginbotham, John Mackie, Jay & Barbara Jackson, Dave Bears, Kathleen Quigley, Dave Bears, and of course, Dan Hadley. Dan (above, far left) is one of the most talented and gracious people I know and I was tickled to be a part of the event he had worked so hard on! 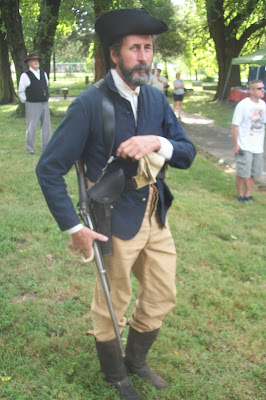