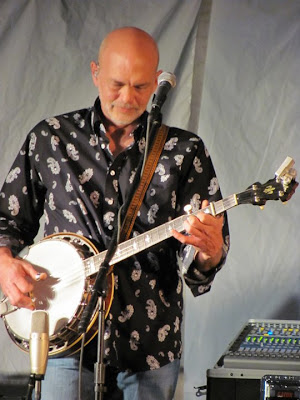 "God is great and so is Steve Martin!"

Amen to that one, Sammy!

Thanks to social media, word spread like a Texas wildfire that Patrick County's (Virginia) own Sammy Shelor is the second winner of the Steve Martin Prize for Excellence in Banjo and Bluegrass. The honor carries a cash award of $50,000, a bronze sculpture, and a guest appearance with Martin on the David Letterman Show November 3.

Martin told the New York Times that five or six "worthy names" were narrowed to a final two or three who were scrutinized on "anecdotal factors, and emotional factors, that are very hard to define and probably wouldn't bear up in a trial." Sammy won by unanimous vote.

The first time I recall hearing Sammy play we were in high school. I was a couple of years, or three or four, ahead of Sammy. I wrote and directed a play called "Our Heritage, Our Hero." It was to be performed in April or May of 1976, my senior year and the nation's bicentennial. Produced by my friend Karen Duncan Erickson, there was a cast of thousands, or dozens. Claudette Thompson Franklin said, "I know this banjo player from Meadows of Dan. . . . "

Leslie Shelor, Sammy's equally-talented-in-different-areas sister was already in the play and heavily involved with its production. So Sammy and his Grandpa came down off the mountain and provided the musical interludes between acts. It was perfect. I recall thinking, "this kid is really good!"

Through the years, Sammy has racked up awards including Banjo Player of the Year from the IBMA more times than I can count. His Lonesome River Band is nominated for five awards later this month. Bandmates -- Brandon Rickman, guitar; Mike Hartgrove, fiddle; Barry Reed, upright bass; and Randy Jones, mandolin -- are equally talented and if you have never heard them, visit the website and order a CD.

I wasn't blowing smoke and neither was Sammy in saying that Steve Martin is great. He has used his celebrity and resources to bring the banjo and bluegrass to a larger audience. His passion has connected him to the best and he called upon the best in choosing the recipient for this award. The board members include Earl Scruggs, Bela Fleck, Neil Rosenberg, Pete Wernick, Anne Stringfield, and Tony Trischka, in addition to Martin.

Martin, along with his band the Steep Canyon Rangers, are also nominated for several awards this year including entertainer of the year. ALSO nominated for that prestigious award is the incredibly talented group, The Boxcars -featuring another Patrick Countian -- John Bowman. (John, I bet your Mama is just beside herself! And your Granny, too!)

Yep, it's a proud day for Patrick Countians everywhere. Our own Leon Pollard, retired teacher and musician extraordinaire, said about Sammy:

"Sammy is not only a great banjo picker, he is a great guy, both on and off stage, and he has never forgotten his roots here in the county. I was proud to pick with him when he was 10 years old and I am still proud to call him friend and pick with him whenever I get the chance. Congratulations to Sammy!"

This is such a great day I think everybody in Patrick County should get a free punkin. Can you hook us up, Sammy? This could be a great way to launch a campaign, Instead of the electoral college, how about a fiddling contest? Best banjo player is president, best fiddler is secretary of state, and so on. But that's a column for another day.
Posted by Deb Goodrich at 9:41 AM

Now THERE is an election year suggestion Im all for, lol: "Best banjo player is president, best fiddler is secretary of state, and so on"