In western Kansas, the wheat harvest is under way; the "golden waves of grain" really are golden. It's quite lovely. Especially when the road construction forces you to stop for 30 minutes and look at them.

Beth Cooper Meyer drove so all I had to do was squirm in my seat as we decided to vary the route, just a little, and drive through McPherson and Hutchinson instead of Ellsworth and Great Bend on our way to Dodge City yesterday. We're headed back to Great Bend for a booksigning today. As we waited on traffic, we were concerned about being late to a meeting with her Dodge City tour guides, but, that is the price of adventure!

We reached Charlie Meade by phone and rescheduled to allow us to check into the Dodge House before we headed to Casey's Steakhouse to meet Charlie and Erica. I adore Charlie. Last year, he came to the Kansas Hall of Fame to accept the award for James Arness, who had passed away only days before. In April, he took that award to Janet Arness, his widow. This morning, at 6 a.m., I'm taping an interview with Charlie talking about his trip. I can't wait. 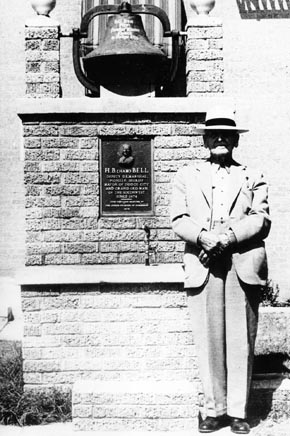 Charlie's life should be the subject of a book. He was delivered in the bank of an ambulance en route to the hospital by the legendary Marshal Ham Bell. The KHOF acceptance for James Arness and the swearing-in by Ham Bell he lists as the highlights of his life. The photo of Ham Bell, above, is in the collections of the Ford County Historical Society. This is the caption:


Hamilton Butler Bell, longest living Old West Sheriff and Marshal. Ham remembered the end of the Civil War and had his name on a WWII Army Air Corp plane. He never shot a man-- and he saved some cowboys from the "Earp gang"--and outlived all of his Western associates. Arriving in Dodge City in 1874, he lived in Ford County until his death in 1947. He was the first president of the Ford County Historical Society, 1931. The bell is from the Union Church, the first church building in Dodge City. All rights reserved. FCHS.

You couldn't make this stuff up. Charlie's life is just another chapter in the story. The photo below, by Doug Ruth, is from last year's Kansas Hall of Fame gala. WIBW's Susie Gilbert presents the award for Marshal Matt Dillon as portrayed by James Arness to Charlie. It was a very special night. 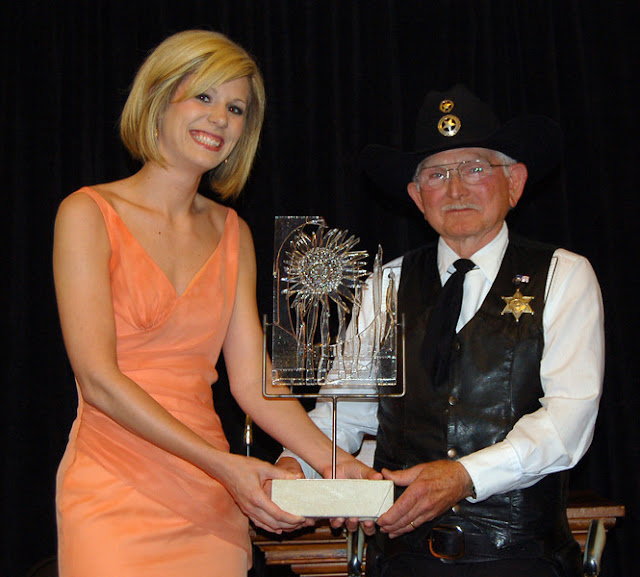 I love Dodge City. Y'all gotta come out here and take a tour with Charlie!

(The ghost tours led by Charlie & Erica will start later on this summer. Visit groovyghost.com for tickets and details. Who knows. . . maybe you'll run into Ham Bell, too!)
Posted by Deb Goodrich at 6:18 AM