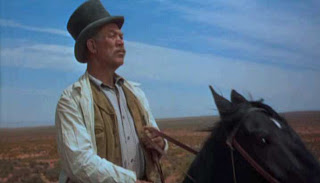 Has there ever been a face like Ward Bond's?  A face big as the West itself. Open. Strong. Optimistic.

The Western Channel is my refuge from the insanity of the world.  Grandson Bubba (two and a half years old) calls it the "Horsey" channel. He walks up to the TV, turns to his grandpa, and says, "Horsey, Papa, Horsey!" I have never seen a child so obviously born to be a cowboy. He was born was this (though I have fostered it, I admit). He loves his stick horse, has named his rocking horse, "Pete," and constantly gallops little plastic horses over the sofa, coffee table, footstools, and Papa's sleeping body.

Which leads us back to Ward Bond. This amazing man enjoyed a career which paralleled that of his friend, John Wayne. Though they were "discovered" at the same time, the Duke is a household name and Ward Bond is known mostly to fanatics like me and Bob Boze Bell. Every time I see his face, though, I am encouraged and inspired. Watch those old Wagon Train reruns and tell me it doesn't make you proud to be an American! Beautiful life lessons!!

A toast to Ward Bond, and to the "Horsey Channel" that brings him into our living rooms each day. And while you're at it, watch The Searchers one more time. Or, my personal favorite Ward Bond role, Sergeant Major Michael O'Rourke in Fort Apache. I love that movie.
Posted by Deb Goodrich at 8:12 AM

Thank you, Thank you. I too love the horsey channel, which I discovered because of my love and appreciation of Ward Bond. Ward has been my favorite actor since I was a kid and Wagon Train was in first runs. You are so right, her does make you proud to be an American