While watching the Abolitionists on The American Experience, I am reflecting on an episode that occurred when I was doing research:

I was in the public library in Augusta, Georgia, twelve years ago or so, and I was reading old newspapers on the microfilm. I had been in so many archives and libraries in those weeks and months that I had become quite adept at quickly threading the film.

Beside me, a black woman and her daughter, a fourth-grader as I recall, struggled with the finicky machine and she glanced my way and asked if I could show her how to operate it. We made small talk; the little girl was working on a class project.

I turned back to my work, hoping they would not glance over and look at the screen. I was scanning the papers from 1865 for advertisements of slave sales and there it was--"Prime Field Hands," it proclaimed, "Auction." The date was April 19, 1865, ten days after the surrender of Robert E. Lee's Army of Northern Virginia, more than two years after Lincoln's Emancipation Proclamation. Other slaves were listed in the ad, including a 7-year-old girl.

It was incomprehensible. How could there be a time that this child could have been torn from her mother's arms and sold for money?

We exchanged looks, smiles, as the mother directed her little girl to search out the information she needed. I quickly made copies and rewound the microfilm. Maybe there was more on the reel, but I didn't want to see it. 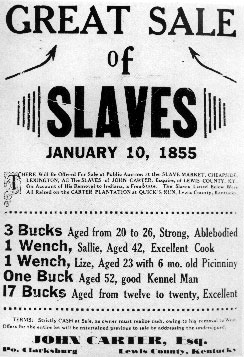