I have had Eric Johnson's new work, No Greater Calling, for a few weeks now waiting for a review. It was difficult to get around to actually reviewing it as it was on constant loan. I carried it with me to talks and stopped to share it at historic sites. The jacket is already showing signs of wear.

"You have to see this!!!" I have enthusiastically informed my history buds. "You have to have this!" 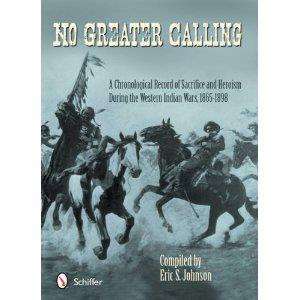 No Greater Calling is a labor of love in the truest sense of the word. Nowhere is this about Eric; it is all about A Chronological Record of Sacrifice and Heroism During the Western Indian Wars, 1865 - 1898. The amount of dogged research that went into producing this 400-page volume is staggering. There is no editorializing, save for the quotes selected by the author throughout or the brief introduction and conclusion. It is simply a chronology of engagements and the resulting casualties of more than three decades of America's asserting control of the western United States. The dozens of photographs are those of graves. . . a quiet, compelling, black and white testament to the soldier's life.

It is one thing to know that George Custer's command was annihilated at the Little Big Horn River; it is another to see each man's name, five pages of names, each a real man. What is most startling however, is the sheer number of engagements and their vast geography. Take, for example, these two minor events, separated by a few days and hundreds of miles:

In all, Eric (right, while in the Navy) chronicles more than one-thousand, three hundred engagements. Some, like Little Big Horn, remain embedded in the national psyche. Others, like those just mentioned, were forgotten until Eric blew the dust from the records. A veteran himself, Eric thought the veterans of this era between the Civil War and the turn of the century were lost to history. 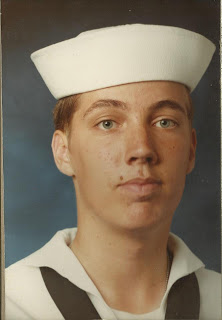 "For men who did all their nation asked of them," he wrote in the preface, "for those who willingly answered their nation's greatest calling, this cannot stand."

Historian John Monnett said, ". . . the American soldier of the frontier army has all but been forgotten or portrayed in  pejorative contexts. Eric Johnson has brought their names and story back to life as the men they were, doing their often undesirable, often controversial duty, a story of individual veterans who deserve the dignity of being remembered. The statistics Johnson brings to the fore in this excellent book will serve as a needed resource for writers and historians for years to come."

I concur. Let me add, this is the most valuable, most un-selfish book to land on my desk in years. Writers and historians have a desire to express themselves, to share their passions and prejudices and thus they insinuate themselves in the story by one means or another, if only through editing. Eric's ego is nowhere to be found in this book. This is a simple, straight-forward, long overdue tribute to men who served in a mostly thankless place for a mostly disinterested nation. This should absolutely be in every public and school library, as well as the shelves of Indian Wars enthusiasts.

It is no surprise that Eric's work has been nominated for the Army Historical Foundation 2012 Distinguished Writing Awards, the Reference Category. A hearty congratulations and a nod to Schiffer for publishing this valuable work.