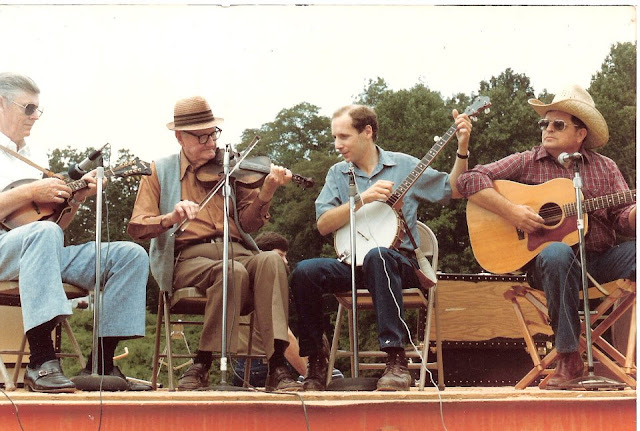 Paul Brown (above,  Verlin Clifton, Tommy Jarrell, Paul Brown and Frank Bode) of NPR fame is an old friend. Paul came to Surry County, North Carolina, to make music with Uncle Tommy Jarell. (I could write a book on Uncle Tommy; there will be other posts.) When I left the position of news director at WPAQ Radio in Mount Airy (where Sherry Boyd was the morning dj), Paul took my place--really well, I might add. He was much better than I. So, now that Paul has hit the bigtime, I thought it might be useful to remind him of a little Pine Ridge (NC) perspective and I sent him this message on Facebook. It was so popular that I thought I would share it with all y'all as well:

To Paul Brown -- The news of Hugo Chavez's being embalmed and put on display reminds me of a "conversation" Grandpa Coalson had with a cousin who was bad to drink. He brought his mama to visit Grandma and Grandpa. While the women were in the kitchen visiting, we grandkids were watching Bob Gordon Theater on TV and Grandpa was having his weekly treat--Dr. Pepper. My cousin talked nonstop for ...an hour and Grandpa didn't even nod much less talk to him. Grandpa did not suffer fools and the conversation was pretty ridiculous. Finally, my cousin said, "When I die, I want to be put in a glass coffin so people can come see me." Grandpa looked at him and said, "Nobody wants to see you now. Why in the hell would they want to see you after you're dead?" Yep, Pine Ridge.
Posted by Deb Goodrich at 8:07 PM