Tomorrow is a big day. Meetings in Hutchinson and then reception/talk/booksinging with Michelle at the Independence, Kansas, library. As it is the First day of April, I was thinking of the birthdays that occur this month, in addition to mine, of course. Some remarkable folks were born this month, beginning with my friend, Dena Wallace Anson.

Dena and I met while I was attending Washburn and working at Topeka Transit as a dispatcher. She was hired for Public Relations and we had an instant bond. She has worked for Washburn now for several years and they would be incredibly lost without them. She is dedicated, very hardworking, extremely capable, and just plain fun. Likewise, her husband Steve, the baseball coach at WU. I love them dearly. 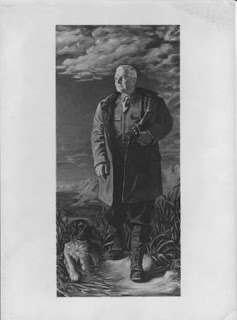 Today is also the birthday of Simon Bolivar Buckner, Governor of Kentucky and Confederate general. His son, General S. B. Buckner II (right) is featured in our book, Kansas Forts and Bases. He was the highest ranking officer killed by enemy fire during World War II.

April 3 is the birthday of Cyrus Kurtz Holliday, my favorite Topekan. A native Pennsylvanian, also like many of my closest friends, Holliday came to the Kansas Territory as an idealistic, optimistic, industrious young man. He was instrumental in founding Topeka and the ATSF Railway. No one has ever loved Kansas more than Holliday. Even his passion was challenged, however, by political divisiveness and gridlock. At a particularly dismal point, Holliday wrote to his wife who was traveling abroad:

". . . I have sometimes become so 'soured' that I have almost resolved that I would quit the town and look up a new home elsewhere. I have given the place eighteen years of my life and a great deal of money -- as you well know --and without my unceasing and untiring efforts Topeka, today, would be no better than the small communities that surround her.
But I have got about tired spending time and money to enrich me who never give, or do, anything except to oppose those things that would make our town and county valuable."

There is nothing new under the sun. Thankfully, Holliday stayed and a couple of years after he wrote this Topeka was asking him to serve as mayor, again, to help the town through its most difficult moments. He declined and went fishing.

I have lots more April birthdays to share. Happy April and stop back by!
Posted by Deb Goodrich at 2:26 PM