Good grief!! Another one of those times I have been too busy to blog, and I am grateful for the good things that have been happening. 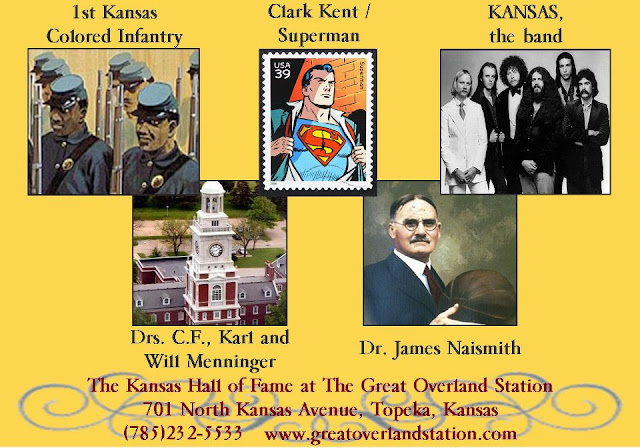 Planning goes on for the Kansas Hall of Fame reception and induction. I am so fortunate to be involved in honoring and spreading the news of some of our most accomplished Kansans. This year's laureates are: James Naismith (who invented basketball); Drs. C. F., Karl and Will Menninger who founded the Menninger Psychiatric Clinic, Clark Kent/Superman, the band KANSAS, and the 1st Kansas Colored Volunteer Infantry (the FIRST black regiment formed during the Civil War). We are beside ourselves that Bill Kurtis would make time to be our emcee for this event. The exhibit honoring these folks opens at the Great Overland Station during the First Friday artwalk, June 7. The reception will be June 21, 5:30 at the Great Overland Station and the induction ceremony is 7:30 at White Concert Hall the same evening. Reception tickets are $150 (and include the induction and will get you preferred seating in the concert hall). Tickets to the induction only are $20 and available through the Great Overland Station or at Eventbrite.com.

This will be an awesome event, celebrating the lives of people who have served and shared our state in meaningful and enduring ways. Plan to see you there!

Michelle Martin and I made a trek to Denver in April, for the Order of the Indian Wars Symposium. Had the opportunity to reconnect with dear friends like Louis Kraft and Jeff Broome and to meet new friends like Eric Johnson and Mary Lattin. Dr. John Monnett, a legend himself, was set up at the table next to us. Thanks to Layton Hooper for all he does to keep this organization going. It is a fantastic group of folks who are committed to studying and sharing some incredible history, history in which Kansas has a tremendous role. I will be speaking to this august group next year so mark your calendars for the April symposium.

Gary and I took a little trip west, as well, staying in the McCracken home of friends Les and Rose Diehl, then heading to Fort Wallace, Oberlin, and Bennington, where we once again took advantage of the hospitality of friends Rod and Dawn Beemer. Along the way, we visited that geographic wonder, Monument Rocks. Gary had never had the opportunity to see this site and I was tickled to be the one who shared it with him! 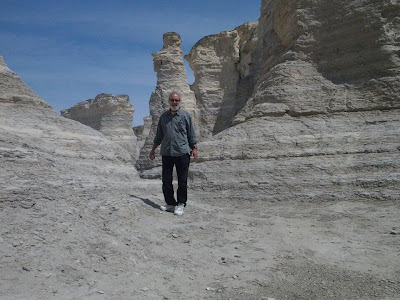 Fort Wallace has one of the most excellent museums in the state, or in the West for that matter, and they just got a huge boost. At his death, one of the museum's volunteers left a gift of $700,000 to the museum and to the local library--$700,000 to EACH of them. The gift was an overwhleming gesture and the museum plans to make good use of it. Jayne Pearce, head of the friends group, was emotional as the second check was presented to the group. I have no doubt they will put it to good use. The communities of Wallace and Sharon Springs have worked so hard with local contributions and volunteer labor and artifacts lovingly donated. (KDOT put in restrooms a few years back and marks the only state money, to my understanding, used at the facility.)

I was invited to be the guest speaker for their annual meeting and they treated Gary and myself like royalty. We stayed at the Sunflower Bed and Breakfast, formerly a Methodist church, in Sharon Springs. I highly recommend it. It is a modern remodel, very comfortable.

Then it was on to Oberlin where I spoke at the high school and at the Last Indian Raid Museum. Decatur County has some incredible history and Sharleen Wurm, Galen Olson and...... gave Gary and me our own personal tour of the sites related to the Cheyenne raid that occurred there in 1878. Their museum complex is first rate. With at least 17 buildings, these folks are passionate about their history and they sure do all they can to share it. Again, we were just treated like royalty. We stayed at the LandMark Inn, built as the Oberlin Bank in 1886. It also served as the county courthouse for a time and the giftshop occupies space where bounties were paid on pelts in a bygone era. Was I thrilled or what to walk into our room, the R. A. Marks Suite, only to find a HUGE print of Buffalo Bill Cody on the wall. Proprietor Gary Anderson is a former banker himself and restoring this downtown landmark was a real labor of love. A real treat was being invited to the home of Galen and Lynn Olson for supper--wonderful company and delicious food. 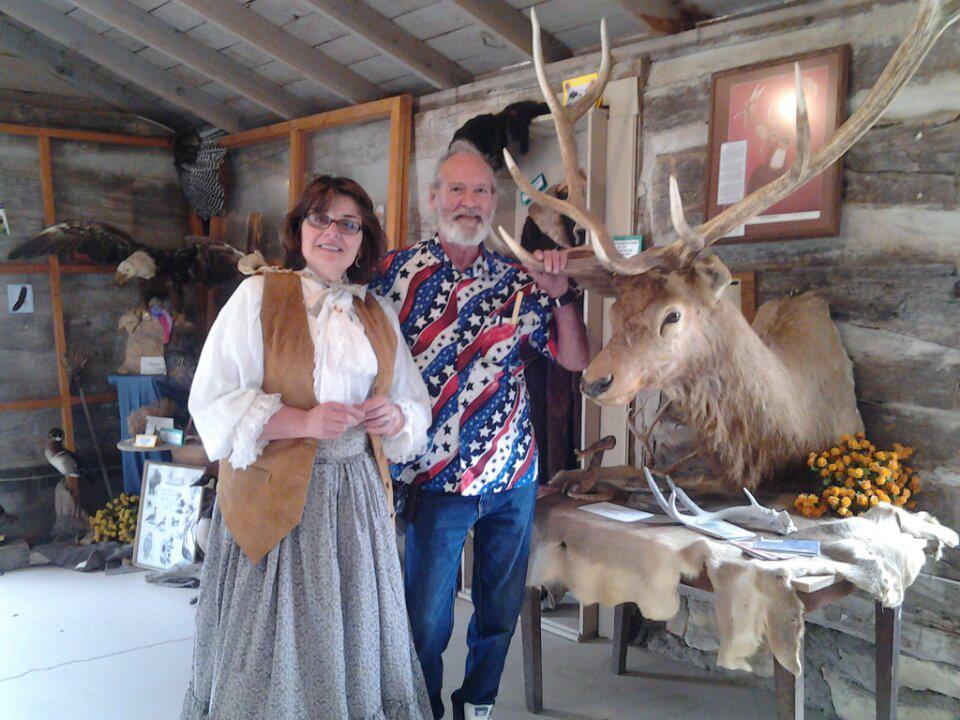 When we said so long for now, we headed to Phillipsburg where we stopped at historic Fort Bissell and were fortunate to catch it open. (It was just a little ahead of the season.) Again, what folks in thse communities are doing to preserve and share their history is so encouraging and truly remarkable. It makes me want to go back and rewrite the book on Forts and Bases! Actually, it should be volumes because there is so much to tell! For example, one of the buildings that has been relocated to Fort Bissell, is a family cabin where Buffalo Bill Cody was a frequent guest. That's enough to keep me coming back.

After visiting the folks at the bookstore in Philllipsburg, a really lovely couple, we stopped in to see Rod and Dawn Beemer--our home away from home in Bennington. Since the next day was our anniversary, Rod treated us to the "Boss Hawg Platinum Anniversary Tour" which featured sites in the story of Anna Morgan and Sarah White, abducted in this area in 1868 and rescued by Custer in 1869. Rod took us to places I would never have found in a million years and the scenery was glorious!!! Lunch in downtown Concordia and their museum is an absolute must-see. I have to say, visiting all these local museums makes me want to write a book just on that. Delphos, that tiny community with a big past, was open as well and it was a great opportunity to discover more than I had known like, Milburn Stone, Doc Adams of Gunsmoke fame, was married in the Presbyterian church here in Delphos. The town is most famous for being the residence of Grace Bedell Billings, the little girl who suggested that Lincoln grow a beard. Rod also took us to the Zebulon Pike Monument and that may very well be the most beautiful view in Kansas. 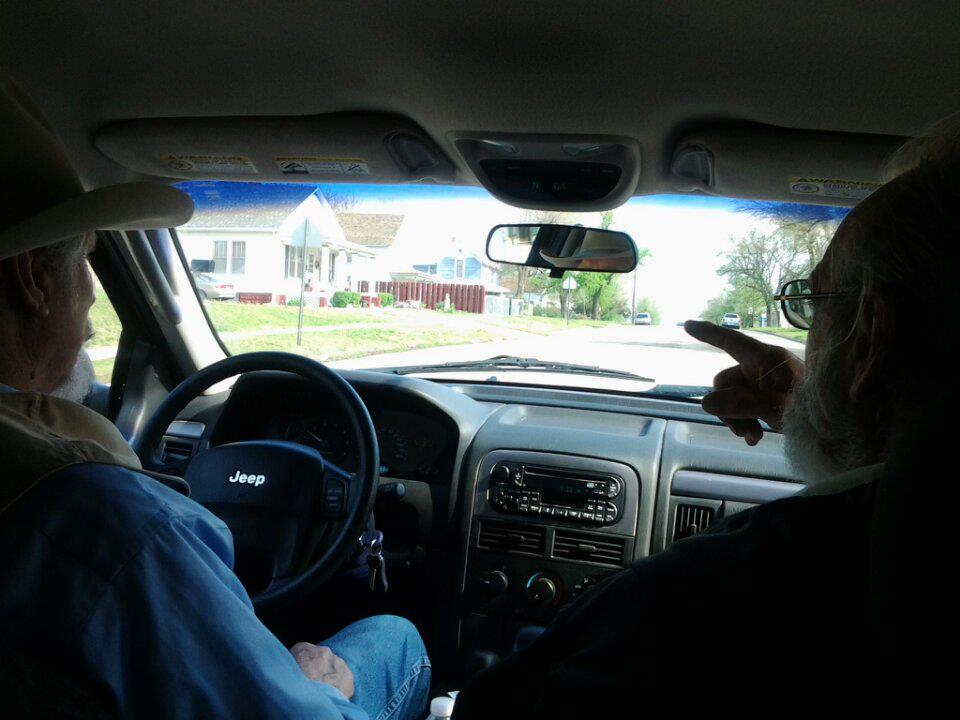 Rod and Gary, driving and riding shotgun, on the Boss Hawg Tour.


Until next time, Dear Reader, Happy Trails!!! This is just a little update from all the great things that are happening. Hope to see you soon!
Posted by Deb Goodrich at 10:56 AM