I first met Tad Marks in Gettysburg. My dear friend, Carol Neumann Waskie, and I were sipping wine by the fire in the Dobyns House. Charlie Zahm was performing and I had become a fan since Carol's husband, Andy, had gifted me with his CD. He was accompanied by Tad on fiddle and Tad joined us in the parlor. The subject of Old Time music came up and I mentioned that I was related to Tommy Jarrell. Tad began to bow and stammer. I could not help but think if Uncle Tommy knew the reaction around the world when I tell people I knew him, and we are, in fact, distantly related, he would look down, rub the back of  his head and chuckle.

Yes, Uncle Tommy (actually cousin but Uncle is a sign of respect because of the age difference) has broadened my circle of friends and deepened the respect shown by perfect strangers.

Through the magic of Facebook, Tad and I stay connected so I can keep track of his own music career. This story he shared today was irresistible for creative types, and I wanted to share it with you: 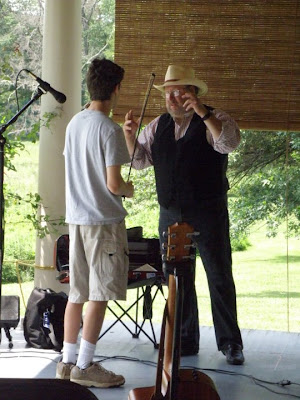 Well the story goes- in a dream I was back in time sitting with Ronnie McCoury in a train station. we were waiting for Bill Monroe the Father of Bluegrass Music to get off the train and we were to take him to a festival. Monroe apparently was without his band and had been playing somewhere out west. Monroe kept talking about the American Indian he sat with on the train a Medicine Man. Monroe picked up Ronnie's mandolin and started playing a tune and this is what I heard. Even though it was a dream- I could see him clear as day and Then.... the alarm clock went off and i woke up !!!I worked this up on the fiddle real quick and recorded it , dubbed guitar and mandolin and electric bass immediately ...I found this original old DAT tape and added some reverb- here it is flaws-out of tune fiddle and all but it sounds just like the tune I heard in the dream. (right, photo of Tad with a student posted by Mike Biel on FB)

And, yes, I for one believe that Bill Monroe's personality was powerful enough to teach even in a dream.
Posted by Deb Goodrich at 1:33 PM