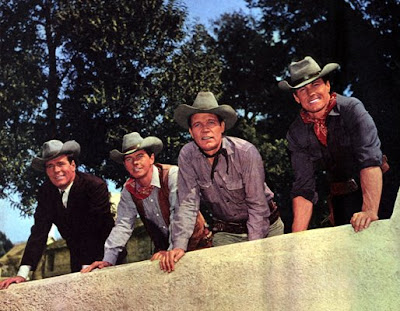 Today is the birthday of Neville Brand (third from left), a character actor I came to know and love through the TV series, Laredo. I was already in love with his costar, Peter Brown (swoon, of Lawman fame, second from left). Add hunks Phillip Carey (left) and William Smith (far right, and see more below) and there's no wonder why I was a fanatical viewer. Brand was a veteran of WWII, and his career is detailed in this article on Combat's website: http://www.jodavidsmeyer.com/combat/military/neville_brand.html It's great reading and corrects some of the misconceptions about Brand's military career. Brand died in 1991 of emphysema.
__________________________________
William Smith

. . . has to be one of the most interesting character actors alive. I fell for this cowboy in Laredo, and the more I have learned about him and his career, the more interested I've become. He'd make a great guest for our radio show. A native of Columbia, Missouri, Smith speaks five languages (including, I believe, Russian) and is descended from Kit Carson and Daniel Boone. I quote directly from Geocites.com:

William Smith was riding horses nearly before he could walk. Keeping true to his roots as a cattle rancher's son, one of his first jobs, as a boy, was cleaning horse stables for Jock Mahoney.

In 1957, Bill secured a screen test at MGM and was signed to a contract. "I had no acting background," he recalls, "but this was at the height of television's western binge, and I squinted well and sat tall in the saddle." 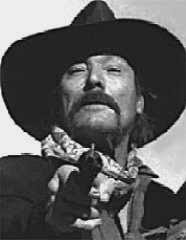 Bill saddled up in Laredo as the half-breed, Texas Ranger Joe Riley and as Brodie Hollister, an aging fast-gun in Disney's Wildside. Among his more notable guest appearances are in Gunsmoke, the episode titled The Hostage and the Kung Fu episode titled The Chalice.

A flood of television watching memories include The Virginian, Death Valley Days, Daniel Boone, Here Come the Brides, Custer, The Guns of Will Sonnett, Seven Brides for Seven Brothers...

Can't forget his appearances in The Young Riders and Walker Texas Ranger.
Bill was once again the Cowboy in The Shooter, directed by Fred Olen Ray. It was nominated for an award at the 1998 Golden Boot Awards.

He was born on March 24, 1934, in Columbia, Missouri, on Rolling Acres, a Hereford cattle ranch. After losing everything to the dust bowl, the family moved to California.

Bill would go on to become one of Hollywood's best-known character actors, with over 300 TV and movie credits.

Wow. Can you get any cooler than that? I'm calling his agent right now.

Today is also the birthday of Dan Fogelberg. When I interviewed Vicki Lawrence last week, she quoted Fogelberg, "The audience is heavenly, but the traveling is hell," and we both commented on how much we loved him. My thoughts are with his wife and all those people who loved him, all those whose lives he touched.
Posted by Deb Goodrich at 2:37 PM

Tiy keft off my cowboy picture:

That picture probably did not show. Do you know how to put a photo on a blogger comment?

It was Clark Gable for Misfits.