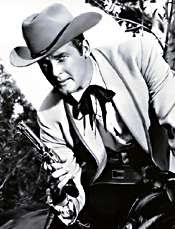 I'm watching Maverick when Roger Moore (left) was playing the lead in the guise of Beau Maverick, the white sheep of the gambling brood. He's wonderful. The synopsis of this particular episode, according to Moore's official website, appears below. One thing not mentioned is that Max Baer Jr. (below, right), otherwise known as "Jethro Bodine," has a bit role. My goodness, he was really a handsome, strapping, fellow! Too bad he got typecast with the Beverly Hillbillies. In a really funny aside, Baer plays the ticket-taker/bouncer for a high-brow prize fight. Roger Moore sucker punches him then lands a right hook on Baer's jaw. Not likely, considering Baer's famous father! Even funnier, the prize fighters were wearing tuxes. Now, perhaps this is an historically accurate detail I missed in my Wild West research. Somehow, all these crucial elements were totally overlooked by the chroniclers: 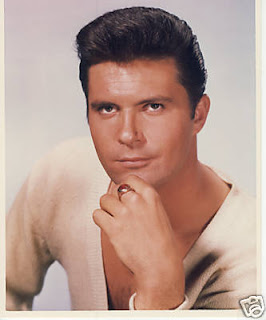 8. Kiz (Robert Douglas) 04/12/1960
Episode 91: Beau Maverick crashes a party in Virginia City thrown by eccentric socialite Kiz Bouchet. Kiz has a penchant for smoking cigars, playing poker, and fighting fires. Recognizing Beau as a fellow free spirit, she hires him to protect her. She believes her life is in danger. Beau discovers that Kiz's cousin Melissa, along with family doctor Pittman and attorney Hanford, are plotting to have Kiz judged incompent [sic] so they can split her $2 million inheritance. Beau comes up with a scheme to turn the tables on Melissa.
A sad side note: In January of this year, Baer's live-in girlfriend committed suicide by shooting herself. He found her; apparently, she was still alive but was placed on life support at the hospital. Her family decided to disconnect the machines later that day according to press reports. Bless him, and her family. She was 30; he was 70.
Posted by Deb Goodrich at 9:02 PM

Interesting to see what happens to actors of long ago. They are not much different from the rest of us, I guess. But they were a real part of our days.