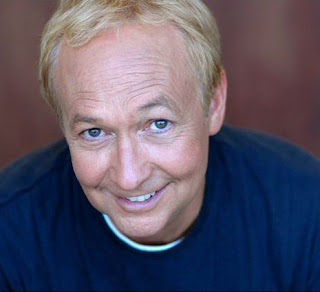 Charlie LeSueur was a guest on my radio show this morning. It was a hoot. His new book is called, Riding the Hollywood Trail: Tales of the Silver Screen Cowboys. A native Westerner, Charlie has transformed his passion for classic cowboy movies to a lucrative business and satisfying personal relationships. Whoa, Sally! Can it get any better than than? (You know, at first I thought Charlie looked like Alan Ladd, but upon further consideration, I believe he really looks like Nick Adams.)
We had a great conversation and I'm not going retell his stories here...visit charlielesueur.com and pick up the above mentioned or Charlie's first book, The Legends Live On: Interviews with the Cowboy Stars of the Silver Screen. I can't think of a more appropriate gift for the Western fan in your house. Charlie will be back on the show before Christmas.
________________________________________
Reality Check
I enjoy almost all my guests, but some are particularly special. My friend Frank Schilagi (below, right) joined me on the air Tuesday and it was great to reconnect after all these years. When I was a reporter for The Mount Airy News, sometime before 1980, I read a full-page article on Frank in the Winston-Salem Journal & Sentinel. At the time, Frank was dean of the Babcock School of Management at Wake Forest University. I clipped the article and put it in a drawer, thinking, "I want to meet that man." 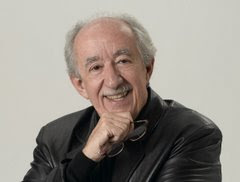 Well, lo and behold, a couple of years later I was working for the Winston-Salem paper when I was assigned to cover the Realtors meeting where Frank was the guest speaker. I introduced myself and we set up a time for an interview. We met at the Steak and Ale on Stratford Road (I think Frank owned it). We had lunch, I made notes, and then Frank cancelled his appointments for the afternoon so we could continue to talk. It was one of the nicest compliments I've ever had.

Every now and then, Frank and I would get together and he would share his infinite wisdom on life and business, which I never forgot. I also never used it. I stumbled and sputtered through life and now Frank has re-entered it and I hope to make the most of his wisdom and expertise. I surely treasure his friendship. 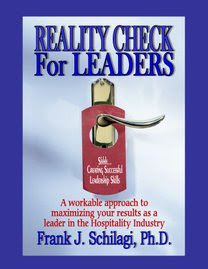 Friends, you too can partake of Frank's wisdom in his book, Reality Check for Leaders (left). It's worth buying just for the prologue, which reads like the opening scene of a Jean- Claude Van Damme movie. The book chronicles a year in the life of a hotel manager, a profession that has served Frank well. While targeting professionals in the hospitality industry, its principles apply in any situation--even the home front. Visit realitycheckforleaders.com and tell Frank that Deb sent you.

I have now begun the movement to get him to Topeka for a public appearance. Bill Moore, CEO of Westar, was very interested so I'm sending Frank's PR info to him and I'll keep you posted on the progress. Frank will be back on my radio show before Christmas as well, so stay tuned to kmaj1440.com from 8 to 10:40 a.m. each weekday morning. I'm the warm up for Paul Harvey and Rush Limbaugh.
And some parting words of wisdom: put Frank's principles to practice, in business and in life. He's one of the most successful men I've ever known, professionally and personally. He's a positive force.
Posted by Deb Goodrich at 11:40 PM