Nerds of a Feather 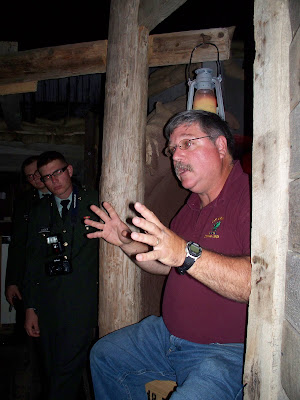 Gary considers himself a "nerd in training" now. This was his first "vacation" that included cemeteries.

On the return trip from Indianapolis, stopped to see our dear friends Dave and Teresa Chuber and went with Dave to Fort Leonard Wood yesterday morning. He was addressing a new class of soldiers and we joined them on their tour of the Chemical School Museum. Outstanding. In the top photo, Dave is explaining the trench warfare characteristic of WWI. The exhibit was really excellent.

Today, onto Winfield where we'll leave behind the nerds and progress to obsessive/compulsive musicians.

Details on the trip and the Little Bighorn Conference to follow. 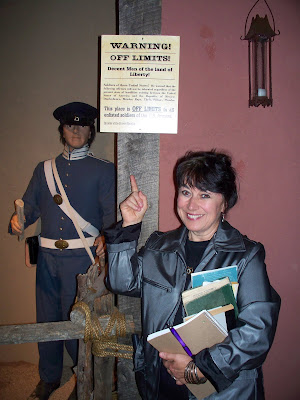 a word on my man Jeb from the good folks in Philly. . . . I would love to attend this conference!

Come to Pennsylvania, just a few miles from Gettysburg, to enjoy a
weekend Civil War seminar in October with some of the top Civil War
historians in the nation.
“Riding with J.E.B. Stuart” will be offered by the Greater
Chambersburg Chamber of Commerce from Oct. 8-11 at the Four Points
Sheraton in Chambersburg. Tours and discussions will focus on the brave
and resourceful cavalry commander and feature authors and historians Ed
Bearss, Eric Wittenberg, Jeffry Wert and others.
James Ewell Brown “J.E.B.” Stuart – then a federal soldier -- was
among those who crushed John Brown’s raid of a federal arsenal in Harper’s
Ferry in 1859. Brown had planned the raid while staying in Chambersburg.
Three years later, Stuart led his Confederate troops in a raid of
Chambersburg in 1862 and masterfully eluded 100,000 Union troops during
their return to Virginia.
Some of the nation’s top Civil War historians will discuss that raid
and its impact. Historians Ted Alexander, Ed Bearss and John Thompson on
Oct. 9 will lead a bus tour, “Stuart’s Chambersburg Raid,” which will
follow the route that Stuart and his men took on the first wartime raid of
Chambersburg, an event that shook the Union all the way to the Oval Office.
“Stuart`s Chambersburg raid was an event of national significance,”
said Alexander, chief historian at Antietam National Battlefield and the
coordinator of the seminar. “The national publicity generated by Stuart’s
Chambersburg raid was an embarrassment to the Lincoln Administration. It
also was one of the final nails in the coffin of the military career of
Union General George B. McClellan. He let a Confederate raiding party slip
around his army, penetrating onto Pennsylvania soil, taking hostages,
livestock and inflicting tens of thousands of dollars worth of damage. A
few weeks after the raid, Lincoln relived McClellan of command,” Alexander
said.
The seminar, “Riding with J.E.B. Stuart,” also will include Stuart’s
work as a frontier soldier, his reputation as a cavalry commander and his
retreat from Gettysburg, which includes a bus tour on Oct. 10. The tour
will be followed by a period-style dinner.
The seminar concludes on Oct. 11 with a discussion of Stuart’s death
during the war, and a panel discussion about Stuart in the Gettysburg
campaign.
For more information about the seminar, contact Cindy Baker at (717)
264-7101 or see the Web site, http://www.chambersburgcivilwarseminars.org.
Costs vary depending on the sessions attended. Price includes motor coach
transportation for guided tours, seminar materials and some meals.
Click here to see J.E.B. Stuart brochure

Since 1989, the Greater Chambersburg Chamber of Commerce and historian
Ted Alexander have offered several Civil War seminars each year and
donated more than $125,000 for battlefield preservation.
To celebrate the milestone, the Chamber will honor Alexander and
historian Ed Bearss, considered the dean of Civil War experts in the U.S.,
as part of the kickoff of the Chamber’s October seminar focusing on J.E.B.
Stuart, the Confederate commander who raided Chambersburg in 1862.
A dessert reception will be held at Four Points Sheraton, 1123
Lincoln Way East, from 7 to 9 p.m. Oct. 8, and will include presentations
to Alexander and Bearss. John Thompson, author of a book about Stuart’s
raid of Chambersburg, will be the featured speaker. Cost is $25.
Chambersburg is about 25 miles west of Gettysburg and just a bit
farther from Antietam National Battlefield in Sharpsburg, Md.
Posted by Deb Goodrich at 11:00 AM