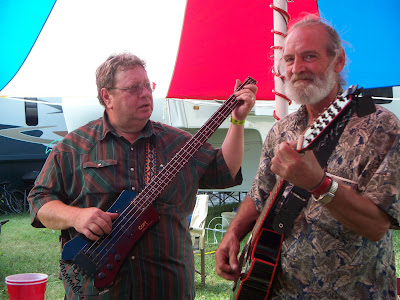 Actually, it was in Fancy Gap, Virginia. My sister and I published a tabloid called A Comin' and A Goin.' We ran schedules of bluegrass/old-time music events and Appalachian cultural activities. One of those we published was from the Walnut Valley Bluegrass Festival at Winfield, Kansas.

I recall thinking, "What do people in Kansas know about bluegrass?"

Well, now I've been to Winfield and I can tell you, "Lots!"

I am embarrassed to admit that after all these years as a Kansan, this was my first trek to Winfield. A virgin, the oldtimers emphasized. (Well, it's been a long time since I heard that word but that's another book. . . .)

After a quick turn-around from the trip to the Little Bighorn Associates, we threw clean laundry in the suitcases and arrived about 11 p.m. last Wednesday night. We located our buds and proceeded to prowl. We snuggled into the tent around 3 a.m., and bright and early Thursday morning I awoke with a sinus migraine. 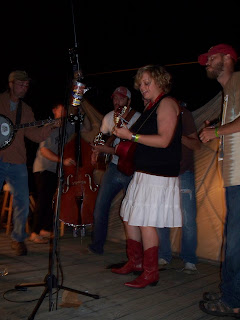 My good man (above right, jamming with his bandmate Preston Miller) loaded me in the van and we headed to Walmart for drugs. He jumped back in the van, I fairly crawled back inside--we were both eager to get back to the music. Click, click, click. The van wouldn't start.

A nice young man with a military background (Gary quickly figured this one out because he kept saying, "yessir!") took a look and said he thought it was the starter. So Gary got on the phone to call the motor club. They said they would call back when they found a tow in our area. I was dying.

We had about half unpacked and there was still a lounge chair stored behind my seat. Gary rearranged our stuff and opened up that chair so I could lie down comfortably, or as comfortably as is possible with a sinus migraine in a Walmart parking lot. So there we were, the back open, the hood up, a sick and incoherent woman in the back, and at least a couple of sorta mechanics checking out the vehicle. Did I add that there was a washboard in the back next to me that Gary is teaching me to play? Could this story get any sadder? Nice folks kept stopping and inquiring, "Do you folks need some help?"

Fortunately, Gary has lots of friends, two of whom came by to return me to camp while he took care of the vehicle. Just as we started off, I felt a wave of nausea and I climbed out and puked my guts out while crouching behind their vehicle in full view of about 10,000 people. Since we had only moved, say 20 feet, Gary was still there and he held me and kept me from just lying down and dying right there.

Sometime later. . . Gary came into the tent. Van's fixed. People are partying. Am I feeling better? I have to throw up, I told him, and as he escorted me toward the restrooms, a trashcan lured me away. Again, he was holding onto my middle to keep me from falling down and we were on the main road with people everywhere believing I am a lush. Again, that's another book. . . .

After hours more of nursing, cold washcloths, ice, and all the curious friends coming by to see Gary's pathetic girlfriend, I was finally able to walk and talk and be somewhat normal. It was 6 o'clock in the evening and Cafe Luigi (below, photo by Chris Frost) was open. We had reservations. The maitre'd, Luigi (aka John Lane), met us and escorted us to the red-checked tables with wine and candles. The spaghetti and meatballs were the best I have ever tasted, and this incredible Italian bistro was located in the heart of the "Bucket Camp" and hosted by folks from Nebraska. It was the most beautiful setting, with music provided by our fiddling friend Chris Frost (who lives down the street from me). Then his bandmates Stuart Yoho and Tom O'Brian joined him with gypsy tunes. (Their group is called the High Falutin String Band. . . . updates to follow!)

I was taken into the Win-fold.

PS--The band photo in the center is the Freestate Revival from the Kansas City area. They are awesome!!! More on them in the coming days. 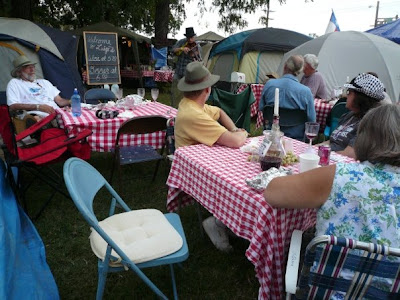