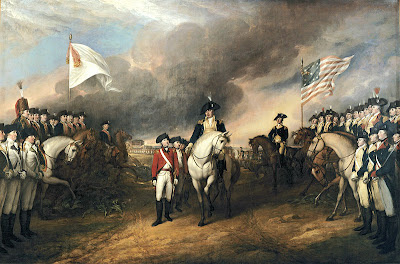 Folks, it pleasures me greatly to bring you yet another proud moment in Virginia history. . . .

On today's date in 1781, the siege of Yorktown was underway. The events unfolding would mark the end of the American Revolution and signal that the work of creating a country would go on. The scene above depicts the surrender of Britain's Lord Cornwallis to General George Washington of the Continental Army. This is a story we learn early in Virginia. . . . Lord Cornwallis--vain, arrogant, scoundrel that he was--claimed to be sick that day. He remained on ship, I believe, and sent an aide to surrender. Washington, proud (somewhat haughty man that he was, but he had reason to be proud!) in turn sent his aide to receive the sword of surrender, thinking it improper for a man of his rank to accept surrender from someone of lesser rank.

While at Fort Leavenworth a few months ago, there were some visiting officers from the French equivalent to the Command and General Staff College. After class, one of the Americans commented to the Frenchman seated beside him:

I know we're not supposed to make French jokes, but have you seen this?

Thus, he proceeded to type into the Google search engine, "French military victories."

Result: "None Found."
He laughed hysterically and I went up to the French officer, placed my hands on his shoulders and said, Direct your friend to the Victory monument at Yorktown (below). We really don't care if you've had a victory since. That's the one that counted.

In fact, the French outnumbered the Americans at Yorktown and without them we would never have gained our independence from England.

A toast, dear friends, to the heroes of our American Revolution and to the French people, to whom we still owe a debt of gratitude. A toast to Virginia. . . .where America began. 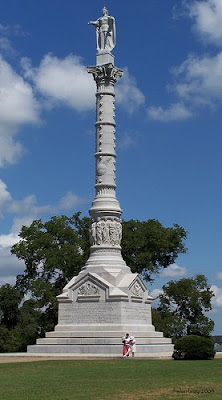 Photo of Yorktown monument by fisherbray on Flickr.
Posted by Deb Goodrich at 12:15 AM