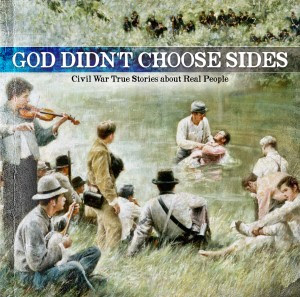 This is officially my new favorite CD.

Steve Gulley was being interviewed on WBRF Radio in Galax, Virginia, by my friend, Sherry Boyd. When the music conversation turned to Civil War history, I was fairly jumping up and down. While Steve described the story of Amos Humiston, I was typing Sherry messages via Facebook: "My friend, Mark Dunkelman, wrote the book on Humiston's story--Gettysburg's Unknown Soldier!"

Sherry and Steve talked about Jennie Wade, the young woman killed by a stray bullet during the battle of Gettysburg. These and many more poignant stories of the war found their way into song with the release of this CD, God Didn't Choose Sides. I could not have said it better.

As a "popular" historian, it has always been my mission to share the stories of real people and to make the experiences of the past come to life in a meaningful way. I have always felt that I was introducing people to one another across time. The people I have met in studying the Civil War are as real to me as any living person I have known because they are real; they are just not alive at this minute. But in a few minutes, neither will we be alive -- whether that is five minutes or five hundred thousand minutes from now. I have always understood this --that people before us were just as real. This CD is based on that understanding. As incredibly large in scope as the American Civil War was, it was made up of the thousands upon thousands of stories of ordinary people, of soldiers like Amos Humiston who died on a battlefield far from home clutching the image of his children. That experience is timeless; every soldier in every age can relate, as can every wife waiting for a husband's return. Jennie Wade and Amos Humiston did not choose to make history; rather, they were making a life when they became swept up into history. That's how it happens, and those are the ties that bind us through the ages. This CD is an eloquent and compassionate voice bringing the past into our present.

It is obvious that this entire production is a real labor of love. Tim Stafford, from the band Blue Highway, commented, "It was a great experience, working with some of my favorite people like Ron Stewart, Adam Steffey, Steve Gulley, Bryan Turner. Justin Moses and Mark Fain."

Tim added, "Sam Passamano's vision for the record was built around the idea of the common man's experience in the Civil War, and I think the songs are consistent with that vision. I'm glad that I was able to be a part of it as a songwriter, guitarist and singer."

Tim lent his vocal skills to "Providence Spring," the miraculous story of a spring that appeared during a thunder storm in the midst of Andersonville Prison, the most notorious of the prisoner of war camps necessitated by war. (While Andersonville has become the most widely known, every POW camp, North and South, was a hell on earth. My great-grandfather, captured at Culp's Hill on the second day of the fighting at Gettysburg, went to Fort Delaware and then to Point Lookout, Maryland, where he remained until the war was over. There are accounts of men cooking rats and eating rotten seagulls that washed up on the shore.)

Tim is justifiably proud. The first licks of the first song, "I'm almost home" (co-written by Steve Gulley and Tim Stafford), promise good music to follow. Bluegrass fans will revel in the performances (Lonesome River Band, Marty Rabon, Russell Moore to name a few), and history fans will delight in hearing treasured stories interpreted in music. With meaningful stories, well-crafted songwriting, amazing musicians and vocalists, as well as  quality production, this CD is destined to be a classic. I am most thrilled, however, by the fact that it is Volume I.

Order directly at www.goddidntchoosesides.com . . . . Buy several: you'll be loaning this one to a lot of friends, so may as well get them a copy!

Sounds interesting. I'll have to look into this one.

I like reading about the Civil War but my eyes get tired so recordings are the best...