Yesterday was one of my most gratifying days as an historian and a woman. 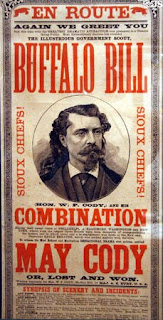 William F. "Buffalo Bill" Cody was inducted into the Kansas National Guard Hall of Fame and I was the historian on film who described his exploits.

A capacity crowd filled the ballroom at Topeka's Ramada Inn as the Association of the Kansas National Guard inducted four new honorees. My friend, Doug Jacobs, accepted the award on Bill's behalf. Doug worked long and hard for Bill to be recognized. Many people know him only as a showman and were oblivious to his true accomplishments. As I watched the film footage with Bill's photos, I looked into his eyes and my only thought was how much I love this man. My second thought was, By God, Bill, you better appreciate this!!!!

As I told Gary, "Bill is the only person you have any reason to be jealous of." (Gary, having good sense, is not overly concerned about losing me to a dead man.) Michelle Henry, Association of the Kansas National Guard, joked about editing the film footage. They took out all the parts where I was slobbering slavishly over the man.

Have I mentioned how much I miss my dear friend George Laughead? Well, I hope to remedy that in December when I try my damnedest to get to Dodge City for the return of the "historic docket book which contains the escapades of some of the most famous lawmen in the American West." Quoting from Dodge City's official press release, "Wyatt Earp (below, left), Bat and Ed Masterson and many other historical lawmen are chronicled in the court dockets contained in this original tome. A glance through its pages is like a window opening onto the history of the old west." 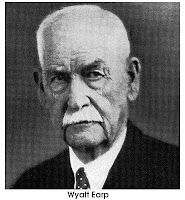 I am beside myself with excitement!

The Boot Hill Museum will sponsor a public viewing of the book from 3 until 6:30 pm. on December 7 in the Old House Saloon.

Why so much excitement? Well, this historic document "got gone" as we say in the hills. It was recovered through the efforts of Ford County Sheriff Dean Bush (his investigators and staff), FBI agents, Ford County Prosecutor Terry Malone, and, drum roll, Ford County Historical Society President George Laughead. The book has traveled a long, crooked, convoluted road back to its rightful owners --- the folks in Ford County, and they are taking its return seriously. While on display, the book will be guarded by the Dodge City PD, the Ford County Sheriff's office, and, another drum roll, Special United States Marshal Charles Meade.

Arrangements are being made to scan the pages of this document for wider access to researchers. For more information, contact Christa Roy with Dodge City at 620-225-8100 or the Boot Hill Museum's Lara Brehm at 620-227-8188. Tell 'em Deb sent you.