The Only Good Indian 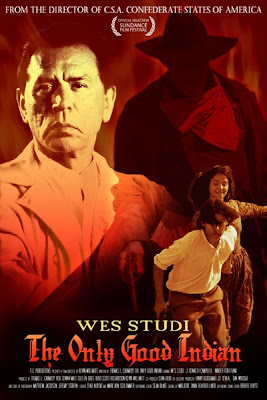 "The only good Indian is a dead Indian!"

This is generally attributed to Gen. William T. Sherman, or his designee, Gen. Phil Sheridan. It's a powerful title. And, it's a powerful film.

Veteran media person Beth Meyers joined Gary and me at Lawrence's Liberty Hall for the film last night. Any excuse to visit this venue is acceptable, but a Kevin Willmott film is a double delight. (Gary, the musician, lived in the projector room years ago but that's a story for another day, or, perhaps a movie. . . )

The Only Good Indian: The storyline is perfect; the script needed some work; the cinematography is spectacular, though a little inconsistent sometimes; the acting is superb (which, of course, is always a nod to the director as well as the actors); the faces are unforgettable, beginning with Wes Studi.

Studi's face is so interesting, his range of expression so vast, that I dare say his face alone could carry an hour or two of film even if you couldn't understand what he was saying and he had no one else onscreen. That being said, this is not his most powerful performance, but it is a solid, credible performance. He is capable of such intensity, such seduction, and the film does not build to that level.

The other face is that of J. Kenneth Campbell--THE white man. His face, too, is a novel--a long, well-worn, passionate, violent novel. With these two men, Kevin had a goldmine and I'm not sure he ever got all the gold from it. But, the treasure he lays at our feet with this movie is pretty precious.

The third face, is Winter Fox Frank, the boy who escapes from Haskell Indian School. In stark contrast to the two men above, the perfect soft complexion, the unwavering gaze--this young man's face was perfectly cast.

Kevin has a genius for framing a shot and the Kansas backdrop is used to its greatest advantage. There were so many shots that I wanted to keep, images that spoke volumes. In fact, I'll bet there are Kansans that will be taken aback by familiar landmarks or landscapes used in innovative ways.

See this movie, buy this movie, share this movie. It's important, it's artful, it will keep your attention.
Posted by Deb Goodrich at 8:01 AM

Deb, you need to start podcasting! You could do some fantastic articles!

Working on it, Leslie!!! Good things are coming and I'll keep you posted. Thanks for the encouragement.

DVDs are now available at www.TheOnlyGoodIndian.com

DVDs of THE ONLY GOOD INDIAN are now available at www.TheOnlyGoodIndian.com