Women of the West 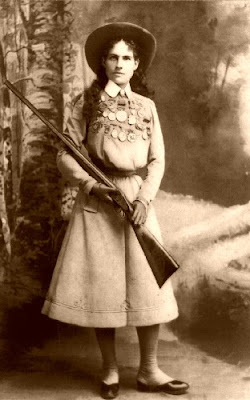 . . . was my topic for the Friends of the Library annual meeting on Sunday. It was great to be asked back to speak to this auspicious group of folks. I was their featured speaker a couple of years ago and I am so impressed by the money this group raises and how much they give to our community.

It was interesting: I asked the audience how many of them were native Kansans. Most of them raised their hands. I asked how many considered themselves "Westerners." Only a couple of hands shot up.

"That's funny," I said, "because where I come from, we certainly consider you Westerners!"

We talked about that icon of Western Women, Annie Oakley.

"Does anyone know where she was from?" I inquired. They shook their heads.

"The great Western state of OHIO!" I informed them. "That definitive Woman of the West came from Ohio."

"Little Sure Shot," as she was dubbed by Sitting Bull, was supporting her family with her hunting skills at the age of 15. Unlike the movie version, she BEAT sharpshooter Frank Butler in their first encounter and he was smitten. They were married and shared life for 50 years before her death on this day in 1926. He died less than three weeks later.

So, dear reader, the West is a place of becoming, of recreating the world and oneself, a place where self-determination, self-reliance, and ability really do matter. The women who made it their home were, and are, special creatures.
Posted by Deb Goodrich at 3:21 PM