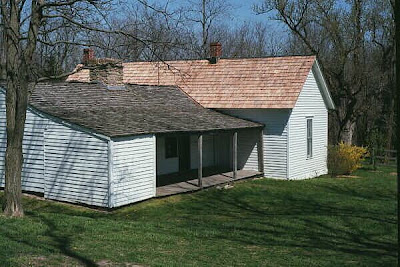 My friend Chuck Rabas left me a message on the phone yesterday. . . "Ted Yeatman has died. . . ."

For those followers of the Jameses and Youngers, Ted is a familiar name. Author of the classic, Frank and Jesse James: The Story Behind the Legend, Ted had established himself as a foremost authority on the outlaws, the Civil War, the war on the border. His research was invaluable. Ted had a great interview with my hero, CSPAN's Brian Lamb, on October 28, 2001, and the transcript is online at http://www.booknotes.org/Transcript/?ProgramID=1642. Ted will be greatly missed.
Ted's obituary follows:

YEATMAN, Ted (Trezevant) P.Born December 16, 1951; died November 1, 2009 at Washington Adventist Hospital in Takoma Park, MD from respiratory and cardiac problems. A resident of College Park, MD, he lived in the Washington, DC area for the past decade. Ted's lifelong fascination with the Civil War began in boyhood, and led to his career as a historical researcher and author. Ted was known to many in the field for his meticulous and thorough scholarship. The author of the critically acclaimed biography, Frank and Jesse James: The Story Behind the Legend, Ted gave interviews for several History Channel documentaries, and for the 2007 feature film, The Assassination of Jesse James by the Coward Robert Ford, in its Special Edition DVD commentary. He was the discoverer of documentation proving that the Pinkertons were behind the bombing of Jesse James' home. His articles appeared in such magazines as True West Magazine, Old West, Civil War Times Illustrated, and The Quarterly of the National Association and Center for Outlaw and Lawman History. Despite facing significant challenges, Ted produced a body of work of lasting importance and enjoyed his life. Ted took particular pleasure in historical re-enactment and recently participated in the 1812 Grand Tactical at Jefferson Patterns Park in Sept., 2008. He also appeared as a confederate soldier in the film Gettysburg. He was born in Nashville, TN and graduated from Peabody Demonstration School in 1970. He started college at Missouri School of Mines in Rolla, MO, and finished his B.A. at Peabody College in 1976. He also earned a Masters in Library Science from Peabody in 1977 and a paralegal certificate from George Washington University in 1993. He was preceded in death by his parents, Trezevant P. Yeatman, Jr. and Nancy Lee McDearman of Nashville, TN. Survivors include his uncle and aunt, Dr. Harry C. Yeatman and Jean A. Yeatman of Sewanee, TN and his first cousins, Ruth Kriz of Fairfax, VA, Devan Cook of Boise, ID, John Whiteside of Columbia, MO, Martha Whiteside of Sonoma, CA, Clay Yeatman of Lilburn, GA and Jean H. Yeatman of State College, PA. A Memorial service will be held in 2010 at St. John's Church in Maury, Co., TN. Online condolences to Legacy.com. Memorial contributions may be made in his name to The James Farm, 21216 Jesse James Farm Road, Kearney, MO 64060. (pictured above)
Posted by Deb Goodrich at 10:24 AM

I am deeply saddened to hear about the death of Ted Yeatman. Ted's monumental book "Frank and Jesse James the Story Behind the Legend" will no doubt leave a lasting legacy to Ted's talent as a meticulous researcher and author. Ted's work will be enjoyed by readers and referenced by researchers through the generations and will be considered by many the last word on Jesse and Frank James. I send out my deepest condolences to Ted's family and to all who knew and loved him.

I consider myself one of the lucky ones. I was fortunate enough to spend time with Ted and exchange emails with him through the years. Ted was quite a character who was a literal walking encyclopedia on various historical subjects. In September of 2005 myself, along with James Gang historian and author Ralph Ganis, traveled to Maryland to spend the day with Ted. That sunny day in September is not one I will soon forget! Both Ralph and I were on a special trip to take custody of Ted's research archive. We all three spent hours pouring over 25 years of research that included thousands of pages of notes and correspondence with a literal who's who of names well known in James Gang circles. We took this task very seriously and considered it a privilege to be the custodians of Ted's work. The Ted P. Yeatman papers are now housed in the Ganis Collection. After corresponding with Ted I got a gift from him that will be cherished for years to come. Ted boxed up his research library and mailed his books to me for my collection. I consider it a privilege to scan the pages complete with turned down corners and notations in Ted's hand. As I compose this message with a heavy heart, Ted's library looks down on me calling to be read one more time.

Jay, thank you so much for sharing your thoughts and feelings about Ted. You know, I think so often of what it means to be an historian, and it is essentially the role of custodian. . . of taking custody of the stories and passing them on. What a wonderful gift to have had Ted's company and trust, and each time you touch one of those books you will feel his presence. You are, indeed, one of the lucky ones!