Varina Davis had already fled the Confederate capital of Richmond when, on April 2, 1865, her husband hastily gathered a few things and headed to the Deep South. He hoped to escape the Yankee army and to sustain the Confederate government elsewhere. Ah well. The best laid plans of mice and men. . . . 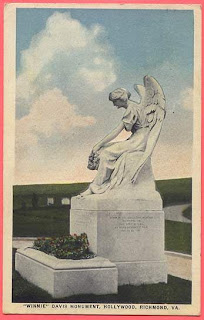 The flight of the Confederacy's First Family is so poignant, so wrenching, especially that of Varina and the children. In the final days, Jeff bought her a gun, taught her how to use it. He flatly informed her that at least she could force her captors to kill her if unable to protect herself.

In the words of Job, what a miserable comfort!!! Sometimes, I want to smack this man. Could he find no words to comfort? Was honesty that brutal really necessary? As the First Lady stepped on that train that dreary night, a babe in arms and others huddled around her, the last parting words of her husband had been, "I do not expect to survive the death of constitutional liberty."
Gee, Honey. Love you, too. Even with her world falling apart, she should have smacked him. Jefferson Davis loved his wife, his family. Like many men, however, he was a miserable comforter.

When the Command Tactics team from Fort Leavenworth took visiting officers from France on a staff ride last week, I was privileged to go along. Here we are in Liberty, Missouri, at the site of the first daylight bank robbery in the United States. (Frank and Jesse James are credited with this robbery, though they obviously did not acknowledge the fact.) I was elected to explain the Jesse James story. When asked for a show of hands of those who knew about Jesse, most said yes, "We've seen the movies." Fortunately, many had seen the Henry Fonda/Tyrone Power version and that was a great starting point for the discussion. French officers also visited our friends at the James Country Mercantile where they purchased accoutrements from the Civil War era. Is this a great country or what? 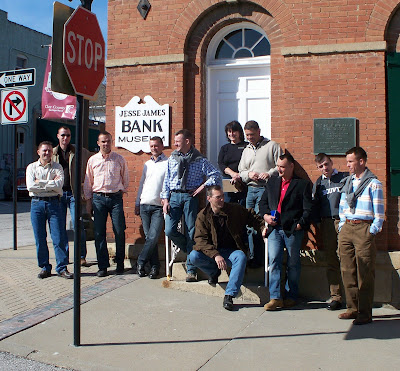 In retrospect, always appreciated Lee's "our cause is lost". Looking at the years and years of fighting in Ireland, Bosnia, Rwanda ....., he was so wise - at least to my limited view. Davis fought the good fight. But he was a conservative of the times. Lee was wise, Davis was not.