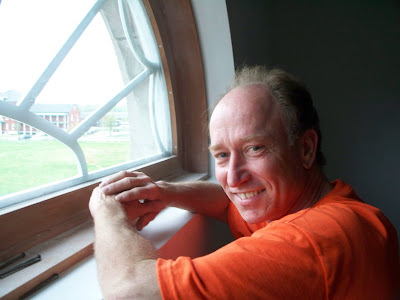 Maybe Pershing looked through this window. Perhaps Eisenhower did. Maybe they spent their time in the gym and never ventured upstairs. Great. Then I'm one up on them.
While visiting Jefferson Barracks at St. Louis last week, I saw the sign that read, "The Missouri Civil War Museum." The building was obviously being remodeled and the door was open. It was irresistible.
Inside, I found the Three Musketeers of the St. Louis Civil War World--Mark Trout, Gary Stevens, and John Maurath. A day of hard labor had not curbed their enthusiasm for this project, and they began plying me with gifts--calendars, brochures, and one square nail. (Historians are cheap dates.) 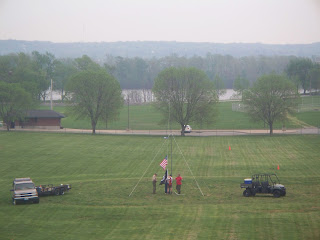 John (top photo) gave me the grand tour, which included scaling scaffolding and climbing ladders. It was well worth the view of the parade grounds (with the Mighty Mississippi in the background) through this newly installed, but original, window. Boy scouts had begun gathering for a weekend event and were raising the flag (left).

John's excitement was contagious. He explained that the building in which we were standing had been a gym and that notables such as Pershing and Eisenhower had used it while stationed here. The history of Jefferson Barracks itself could fill volumes. (In fact, Marc Kollbaum, curator of the historic park, has completed Volume I, 1826-1894, and is at work on Volume II.) For example, around 200 Civil War generals served here at some point. My special interest was Jefferson Davis, yes, the Confederate President, who escorted Chief Blackhawk to these barracks after his defeat. Davis was accompanied by Robert Anderson, yes, the same Robert Anderson who later surrendered Fort Sumter and then lived to raise the U. S. flag again at that spot in 1865--the same Robert Anderson, by the way, who is buried next to George Custer at West Point--there's just no end to the connectedness of Civil War history.

If you're passing through St. Louis, stop and visit these guys and ask for your own V. I. P. tour. In the meantime, visit www.missouricivilwarmuseum.org. Tell them you know Deb and I'm sure they'll give you extra special treatment.
Posted by Deb Goodrich at 9:01 AM

I'm glad I found this blog. I will have to look it over. I really enjoy learning about the Civil War in addition to other periods in American history.

Chris, glad to have another convert! Join us anytime.