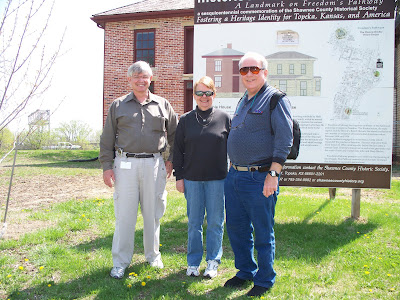 While Sandy and Betty Barnard were visiting us last week, I gave them the nickel tour of Topeka. The first stop was the Ritchie House, 1116 SE Madison. Lo and behold, who should be walking by on his lunch hour, but our good bud and history afficianado Terry King (above left, with Betty and Sandy). 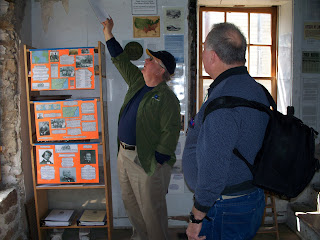 I was just in the middle of relating the story of Ritchie and his family, including the fact that John Brown spent the night in the house, when up drove Bill Wagnon. Bill, my former history professor and potentate of this project. He gave us the grand tour and we had a grand visit. (Bill, far left, describes the construction of the historic house.)

From there, we headed to Topeka Cemetery. Rest assured, folks, if you come to Topeka, I will take you to the cemetery. Fortunately, most of the hysterians we know are as appreciative of the dead as I, so they enjoy it. The Barnards were no exception. From our home, Sandy was headed to the Washita Battlefield in Oklahoma, and our own General/Governor Sam Crawford commanded the 19th Kansas, serving in that area. He was thrilled to get photos of Crawford's grave. I have to admit, Crawford is one of my favorite characters. . . . I'll share more on him later, but in the meantime visit: http://skyways.lib.ks.us/genweb/archives/1918ks/bioc/crawfosj.html.

Freddy also sent me the link to news of his boys' racing exploits: http://iowahawk.typepad.com/ This is what folks back home do for a good time. Aren't you jealous?
Posted by Deb Goodrich at 8:00 AM

"Welcome Monica's Boyfriend!" that is hillarious! I nearly fell off of the couch laughing!

Yes, Freddy used to keep us rolling. A plumber by trade, Freddy would regale us with episodes of leaks and hazards in Mount Airy, NC. One of the best was the time they had to shut off the water to the projects. He and his partner couldn't work for the kids stealing things from their toolbox and taunting them. Finally, they shut off the water main and left. The next day, there was a very heavy woman in a lawn chair with a fly swat stationed there to keep the kids away. It was hysterical. Oh well, that's a column unto itself. . .

The last part of the water shut off story involves a huge woman launching a foul mouthed 5 year old (himself weighing over 100 pounds)through a closed screen door,with a backhand swat- better than the Williams sisters -after he turned the air blue with bad language upon my return