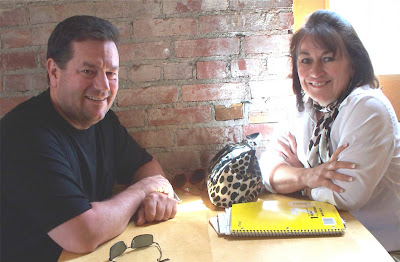 Tom and I could not have enjoyed more our visit with Jack Holt (above). If he looks familiar, perhaps it's his movie star dad you recall--Tim Holt. Jack really does bear a striking resemblance to his father, co-star of the classic Treasure of the Sierra Madre. Jack's grandfather, also Jack, attended Virginia Military Institute and became somewhat of a legend in rebellion.

Jack was in Lawrence over the weekend for KU's graduation. His girlfriend, Laura, has a son who just earned a film degree. We met at Starbucks and Jack regaled us with stories of the Holt Clan (we have common Virginia roots). Tom and Jack nearly were derailed while swapping tales of adolescent idiocy, which lasted WAY beyond adolescence for each of them. Today, Jack and Laura headed back to Washington where Jack is the Pentagon's "new media specialist." Watch the blog as I share more from our interview.
A great day on the radio today with Steve Foreman, and have gotten so many email comments. Thank you, thank you, and thank you!
On Saturday, Tom and I scouted the itinerary for our wine tour. I just want to share one of those photos with you, just for the sake of temptation. . . . 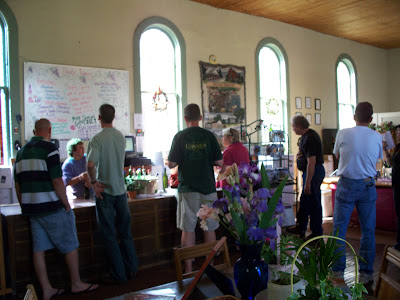 Happy people sampling wine in a church converted to winery. Come worship the grape with us!
Posted by Deb Goodrich at 11:41 PM

Looks like some awesome things going on out your way lately!
Congratulations on the radio show and wine tour!

Left this on my blog:
"Have until April to decide this one. Always liked The Bonnie Blue. And the Blood Stained Banner is certainly dramatic."

Most Confederate flags that get hoisted are actually the naval jack. In memory of the CSS Virginia?