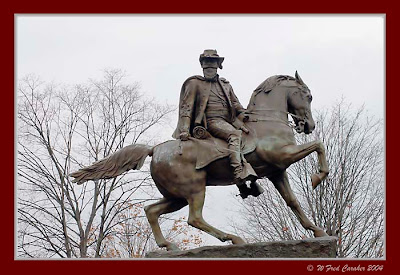 My, but May was a tough month in the Confederacy. As I wrote on yesterday's blog, Stonewall Jackson passed away May 10, 1863; Jefferson Davis was captured May 10, 1865; William Clarke Quantrill was captured and wounded May 10, 1865. It just gets worse. On this day in 1864, Cavalry Commander J. E. B. Stuart was mortally wounded at Yellow Tavern, near Richmond, Virginia. He would die the next day.
The colorful Cavalier was a main character in Kirke Mechem's opera, John Brown, which I had the pleasure of attending with friends this week. I instantly recognized Jeb with his plumed hat and yellow sash, though I'm not sure that's what he would have been wearing while serving in the federal army in Territorial Kansas. What I did not recognize was the cigarette he smoked.
A cigarette?? 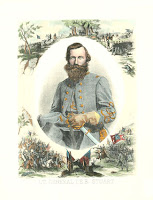 We had just re-watched Ron Maxwell's Gods and Generals (I know, I know, but it has some great scenes!) Have I said how much I despise the portrayal, or perhaps the direction, of J. E. B. Stuart? Anyhow, in the movie when he meets General Jackson, Old Jack asked Jeb if he used tobacco and Jeb replied, "no, not in any form." My expert and Jeb biographer, Tom Perry, thinks this was based on a conversation the two had concerning alcohol, not tobacco. Even so, Tom said he had found a couple of references to Jeb's enjoying a pipe now and then, but certainly never a cigarette, and there was no indication of regular use of tobacco "in any form."
A cigarette is just about a total anachronism in the 1850s. Tobacco was primarily chewed or smoked in pipes, which were much more common than is portrayed in film. Likewise, cigars were gaining in popularity.
So why did Kirke Mechem have Jeb smoking? Literary license, I guess. In the opera, Jeb's character stood in for all things Southern, a "self-appointed Cavalier" in contrast to Brown's "Puritanical" and "Cromwellian" roots. Perhaps it was as if slavery wasn't enough, but it was necessary also to portray the sin of raising tobacco. I don't know.
I thought the opera was wonderful, though. John Brown's life lends itself to such dramatic portrayal. The music was incredible; the staging was just nearly perfect. The history, well, this is drama, not documentary, if only people can remind themselves of the difference. 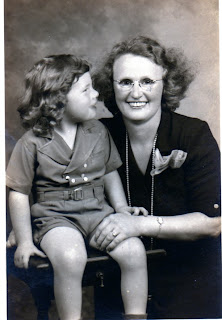 where Jeb Stuart was born. Icy reveled in the history of her home, and saved every newspaper clipping, photograph, event program--anything related to the history of this site. When I was a kid, I would go over and go through her scrapbooks with her. She even let me take them home one time! I still can't believe that. I was 15 and writing a regular column for The Enterprise in Stuart. Icy's scrapbooks were the first historic documents I ever used.
Tom Perry tells me he is concerned that they are not being properly cared for and suggested to the Patrick County Historical Society that they go to Virginia Tech with the other papers Tom donated. I think that's a great idea. It's difficult for local history groups to preserve items properly. Think of this when you're making your will or donating items. Who has the ability to care for your items and who will make it available to future researchers?
Here's a photo of Icy and her son, Bowman Brown. What a beautiful image. She had a tremendous heart, and such class. Read more on Tom's blog at the freestateofpatrick.com.
Posted by Deb Goodrich at 1:49 PM