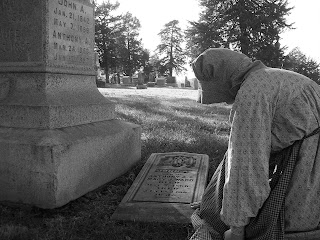 Lunch today with ghost hunter, Beth Cooper. Monday night, she invited me to join her and her spirit sleuths for an investigation of the Free State Capitol. It was interesting. I showed up at dusk and we congregated in the overgrown grassy area behind the territorial landmark. I joined Devin, Beth's daughter, and Nick, who is originally from North Carolina. The crew had already situated sound and motion recorders throughout the building. As it grew darker, we scrambled to the back of the basement (I could stand but the others had to double over to move). We seated ourselves comfortably on the rocky earth -- I was fortunate to find a foot square of concrete. Then, we turned out the lights, put the energy detector on the ground, and waited.


Nick introduced us to whoever or whatever might have been listening. I was pretty self-conscious honestly. To speak to these "spirits" in front of other people was just a little embarrassing. After a while, of course, I got over it, and addressed the darkness. I called for Franklin Crane (below), Pennsylvania dentist, one of Topeka's founders, father of Topeka Cemetery, Jayhawker, spiritualist: 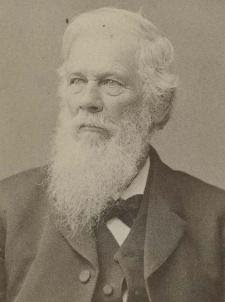 "Mr. Crane, if you're here, I would like to talk to you. I wrote a book about your cemetery. I take people there and share what you did. My friend Don Lambert is researching your life and is portraying you."


The response was strong and immediate on the energy sensor. I asked other questions, mostly historic ones, and there was little if any response. "Did you know Isaac Cody? Did you know Col. Sumner?"


Nothing. But when I was specific about other things, things in his life, the response was strong. "I know, Mr. Crane, that you were too old for the army but you believed so strongly that you joined anyway" --a quick, definitive response.


The others asked some questions, attempted to reach other spirits. It irked me when Nick referred to Mr. Crane as Franklin. I thought it inappropriate. But Nick is a sweet guy and meant no disrespect. Mr. Crane didn't say anything. Then I thought about Franklin Crane as if he were standing before me, and addressed him again, "Mr. Crane, did you become interested in spiritualism when your wife died?"


The response was immediate.


"When you were alive, were you able to contact her after she passed?"


Again, the response was immediate. I pondered those things and didn't ask much else. Did I really have a conversation with Franklin Crane? I don't know. I just don't know.

(Join Beth and Cathy for one of their fascinating tours and decide for yourself if the spirits are really there.http://newmediacafe.net/ghosttourtopeka/index.shtml) 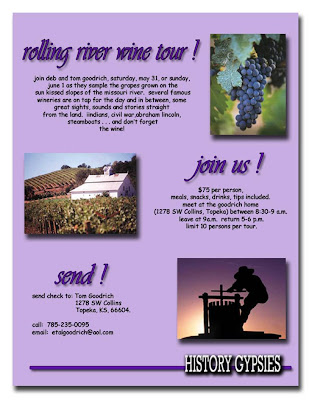 Another oneophile! Splendid. Always on the lookout for new wines, so would be interested in any recommendations, although that said I don't think there's much in sale from the Topeka region here in London: almost all American wine we have is Californian.