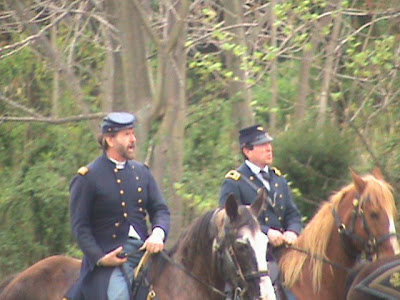 No matter how much Andy Waski, left, and John Sirlin, right, urge them on, the Yankees still can't whoop Stonewall!

"At Pennsylvania's Neshaminy Park, we recreated 'Actions at Chancellorsville, VA,' May 3, 1863, as a 145th Anniversary event. We were portraying units of the 3rd Division, II Corps," said Andy. This was the 19th Annual Civil War History Reenactment, held on April 26-27. 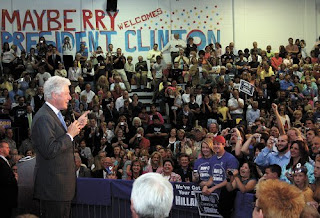 I was not able to attend Bill Clinton's speech at the Mount Airy Middle School (left, compliments The Surry Messenger) a few days ago (and I don't think Freddy got his sign ready in time), but my on-the-spot reporter, Tom Perry, was there in my stead.

"We did not wait for hours to see Clinton," reported Tom, "and we were some of the last to get into what I estimated was a crowd of about 600, not thousands as the media reported." Read the rest of Tom's account at: http://freestateofpatrick.com/blog/2008/05/02/sox-for-president/ 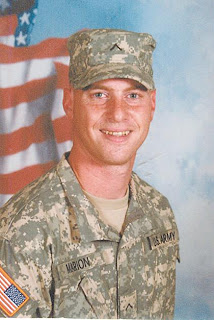 A Sad Story From Home

Pfc. Adam Marion (right) was laid to rest in Surry County, North Carolina, today. He was killed in Iraq a few days ago. Our prayers are with his family. He was a beautiful boy.

From Angela Schmoll in The Surry Messenger:

DOBSON — Jack and Tanna Wermes had never met Adam Marion, yet they stood with dozens of other people along the route that lined his return to Surry County Saturday morning.

“We just got through grocery shopping,” said Tanna Wermes. “We didn’t know he was coming home today, but we saw all the fire trucks at the intersections and I thought, ‘It could be that boy that died.’ When we found out it was, we decided to wait.”

The Surry County Sheriff’s Office escorted Marion’s parents, Donnie and Pam Marion, to Greensboro early Saturday to meet the plane bringing their son home. There they were met by Guilford County deputies and joined by representatives of the other Surry County law enforcement agencies and the Patriot Guard Riders motorcycle group, which rides with U.S. flags and yellow banners.

“Every jurisdiction we passed through they had blocked exits and some traveled with us for awhile,” Sheriff Graham Atkinson, who drove one of the escort vehicles, said Sunday. “We saw the first people waiting for him on I-40 behind the concrete barrier. All along the way there were people pulled over and standing outside their cars, some were spontaneous and some had obviously been waiting.”

The numbers increased after the procession reached U.S. 52 and intensified more when the vehicles reached Surry County. “They were on the overpasses with flags, standing with their hands over their hearts, and a group of veterans saluting at the [Pilot Mountain] state park exit,” he said.

The numbers grew as the group neared Mount Airy. Every intersection was blocked with an emergency vehicle or personnel, and some joined the procession as it traveled across the county.“I think all the businesses on 601 [in Mount Airy] must have shut their doors,” Atkinson said. “There were employees and people lining the street.”

Where the procession exited U.S. 601 at E. Atkins Street, small flags lined the side of the road near Lowes where Marion worked as a teenager. Residents from across the county, including Lowes’ employees, stood among the flags. Deputy clerks, who work with his mother, who is clerk of Superior Court, held a large yellow sign that read, “We love you Adam.”

“I remember that red hair and that smile,” said Laura Wright, who worked with Marion and recalled him with a smile. “He had the greatest personality and never met a stranger. My heart goes out to his sister, his mom and dad and his niece and nephew. I’m keeping them in my prayers. I wish they would send all the soldiers home.”

C.J. Karcanes, who waited with his motorcycle adorned with flags at the top of the exit ramp, said he felt Marion needed to be honored with more than people showing up. He’d been waiting more than an hour for the procession to arrive. “He’s a fallen hero and he deserves every bit of recognition we can give him,” he said. “I wish there could have been a parade with a brass band and him coming home alive.”

The groups of residents lined the route all the way to Moody-Davis Funeral Home on Kapp Street, where emergency and military personnel formed a double line. Marion’s family received friends Sunday evening at Piney Grove Baptist Church with hundreds of people turning out to pay their respects.

The family has requested that, in lieu of flowers, memorial contributions be made to The Children’s Center of Surry, P.O. Box 692. Dobson, N.C. 27017. Online condolences may be made at www.moodyfuneralservices.com. 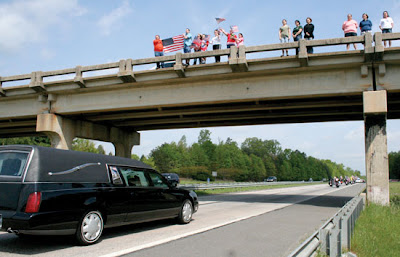 Of course, though Chancellorsville was a Confederate victory, General Thomas J. Jackson was mortally wounded. On this day in 1863, he lay dying. On May 10, he would utter his last immortal words, "Let us cross over the river and rest in the shade of the trees."

Nice to discover the blog of a Civil War buff, I shall read on with interest.

Thanks for visiting my own small corner of cyberspace too :-)