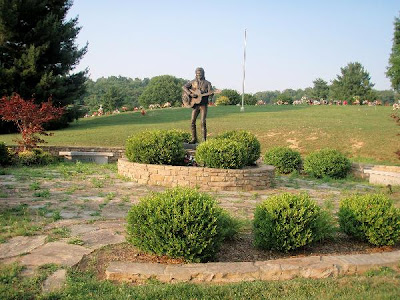 Keith Whitley (statue above, and below right) passed away in his sleep on May 9, 1989. He was 34 and died of alcohol poisoning. He had a beautiful wife and children, was at the top of his music career, was good-looking, lovable, talented. 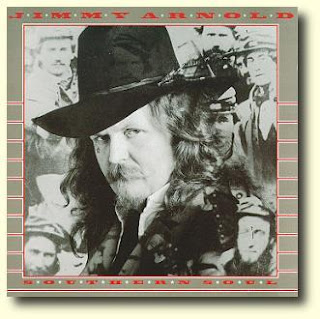 I came across some of his performances on YouTube while searching for Jimmy Arnold videos. Jimmy (left) was a brilliantly talented musician from Fries, Virginia, the same little town my Grandma Coalson was from. (She actually lived in Iron Town for you locals.) Our friend Rob Hodge knew Jimmy, too, and gave me a copy of an article about Jimmy that appeared in a Washington, D. C., newspaper a decade ago. I hadn't thought about him in a long time. When he was just a teenager, I believe, he and Wes Golding had a band together. Wes was another phenomenal talent from Lambsburg, Virginia, who was later a part of "Boone Creek" along with Ricky Skaggs, Jerry Douglas, and Terry Baucom. (One of the best songs I have ever heard is Wes's "Raining in L. A." Some big star will have the brains to record it one day and it will be a smash.) Anyhow, I was thinking about how Jimmy and Keith came from the same culture; how God had gifted them so generously; how they self-destructed; how they were so loved and yet had such a hard time accepting the love, or believing they deserved it. 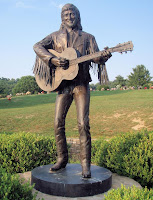 I have struggled with depression, with ups and downs, most of my life. Possessed of a creative mind and spirit, fitting in to the world is sometimes difficult. You in turns embrace and reject it, as the world, in turns, embraces and rejects you. I am so grateful for the culture, the heritage that shaped me. It's like the rich, rich forest floor--sometimes so full of life it seems to burst with fullness. Other times, it is frozen hard and impenetrable.

This is Confederate Memorial Day (or Decoration Day) in North Carolina. A dark day for the Confederacy--Stonewall Jackson died on this day in 1863, Jefferson Davis and his family were captured on this day in 1865, and William Quantrill was shot and captured in 1865 (he would die about a month later). Other states celebrate the 4th Monday in April, corresponding with Gen. Joe Johnston's surrender to "Cump" Sherman. Others celebrate June 3, which is Jefferson Davis's birthday. Virginia celebrates the last Monday in May, just like the Yankee nation. The Confederates couldn't agree on anything.

CALGARY - It's a good thing Davy Crockett didn't grow up in Alberta. A hunter who claims he shot a grizzly bear in self-defence has been charged by the Alberta government. Joe Lucas, from the Carstairs, Alta., area north of Calgary, has been charged with five counts under the Parks Act and the Wildlife Act.
"The reasoning behind the charges is it has been shown the bear may not have been shot in self-defence," Alberta Parks spokeswoman Erin Mikaluk said."It is something we take seriously, and there is a lot of education on what to do and what not to do and how to avoid encounters with bears."

Lucas was part of a hunting party in the Elbow-Sheep Wildland Provincial Park in southwestern Alberta's Kananaskis Country when he shot the four- to five-year-old female grizzly on Oct. 21, 2007.

He claimed the bear came too close to the campsite occupied by himself and his son. Mikaluk said the investigation took more than six months because there was a large quantity of evidence to collect and analyze.

"The bear, in this case, was a lot of evidence itself," she said. Lucas will appear in provincial court this summer. He is charged with unlawfully hunting wildlife, unlawfully possessing wildlife, unlawful discharge of a firearm, failing to ensure a firearm in a wildland provincial park is unloaded and fully encased and unlawfully destroying a bear. Each charge carries a fine of up to $100,000. Mikaluk said the majority of grizzly bear deaths are the result of human activity, and with only 50 in Kananaskis Country, their protection is taken seriously. The executive director of Defenders of Wildlife Canada applauded the decision to lay charges, saying he is encouraged to see the province doing its due diligence to protect the species.

"It seems . . . this person could of taken a number of alternate actions to protect his safety and shooting the bear was unnecessary," Jim Pissot said."We likely have fewer than 320 bears in the province outside of parks. Every single bear is critical at this point."

The provincial government suspended the spring grizzly bear hunt for three years in 2006 when experts warned the animal's numbers might be much lower than the 1,000 previously estimated. Earlier this year, it was announced the suspension will continue into 2009.