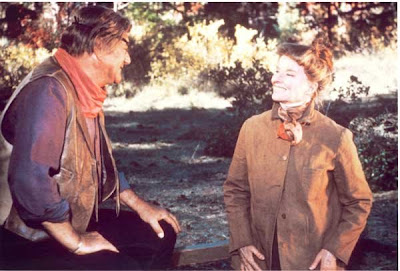 It's the birthday of actress Katharine Hepburn, born in Hartford, Connecticut (1907). She became a Hollywood star by not doing anything that Hollywood stars were supposed to do. Her looks were unconventional: she had red hair and freckles and sharp cheekbones. She didn't wear make-up or dresses, she didn't cooperate with the media, and she had a habit of insulting other people in the business. She played smart, sexy, independent women who were always able to get the guy in the end.

She won her first Oscar for her role in Morning Glory (1933).

After that she hand-picked each of her movies, and she often had a say in who the other actors in the movie would be. Sometimes she rewrote her own lines, something almost no other actress would have dared to do at the time.

In 1991, Hepburn published her autobiography, titled Me, and it was a best-seller. She wrote about her twenty-seven-year affair with Spencer Tracy, her career, and life in her brownstone in the middle of Manhattan, where she lived for more than sixty years.

Katharine Hepburn said, "If you obey all the rules you miss all the fun."

Now there's a motto I can live by. (Top photo: Miss Hepburn with John Wayne in Rooster Cogburn)

For those who don't recall their cinematic or Civil War Trivia, Rooster Cogburn lost his eye at the Battle of Lone Jack, Missouri, and his cat was named for Confederate General Sterling Price.

I must say one of the disappointing things about The Aviator was the portrayal of Katherine Hepburn (by Cate Blanchett if I'm not mistaken). She deserved better. Possibly Howard Hughes did too (than Leonardo) but that's another story.

Have done a short sketch today of Nathan Bedford Forrest. I'm told by a good authority that he was possibly the best cavalry commander in history; naturally I'd love to hear your view.

You know, I thought Cate Blanchett was okay, and I thought DiCaprio did a fine job. The one that really bothered me was Ava Gardner, She was so one-dimentsional in the film and the real Ava was anything but! She is a cousin to my older daughter and my daughter gets her beauty from that side of the family!

DiCaprio wasn't bad, the problem is that I am prejudiced as I really didn't like Titanic (I know, there's a bit of inverted snobbery involved, but the story was just so cliched, the scenes such a straight copy of 1958's A Night to Remember, and, boring pedant that I am, can't resist pointing out they'd have been dead from hypothermia within two minutes of being exposed to the water). But Martin Scorcese rates him, clearly, and you can't have a finer endorsement than that. (The veracity of the draft riots depicted in Gangs of New York is something I must ask your opinion on at some point; as I understand it the navy never fired upon civilians, and there was a strong undercurrent of Irish resentment of black workers behind the riots, though political correctness requires that they always be labelled 'draft riots' and nothing else. But I'm getting way off topic here).

Have posted about Forrest now so, of course, would be delighted to receive any feedback.