A week full of drama:
Since hosting the morning talk show on KMAJ AM, my schedule has just been turned upside down. But it has really been fun. Author/historian Louis Kraft was our guest last week and what a pleasure to spend time with him. (Louis is the author of Gatewood and Geronimo and Lt. Charles Gatewood and his Apache Wars Memoir.)
Cartoonist Leigh Rubin, creator of Rubes (above), was on the radio with me (along with Mike Myers from Creators Syndicate) and then Louis and I attended Leigh's presentation at the local library. There was a standing room only crowd. 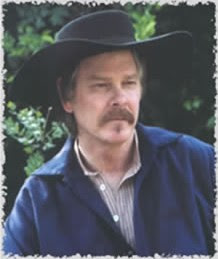 In fact, they turned away so many folks that they plan to have him back. That was Tuesday. Wednesday was Civil War Roundtable in Kansas City and Thursday was here in Topeka, with Louis speaking each night. It's obvious his background is in drama. Louis (left, in costume) performs a one-man show as Ned Wyncoop, Indian agent extraordinaire. It is a riveting story -- a decent man trying to stop the Plains Indian Wars. The newly established national historic site at the Washita Battlefield in Oklahoma will host this performance in December so we're organizing a field trip.
Speaking of drama, I also interviewed Tom Smith via telephone from sunny Southern California. Tom and I chatted about the new Indiana Jones film, which I went to see by myself because no one would go with me! Tom did visual effects on the first Indiana Jones--one of my favorite films. His inside dish: Harrison Ford is a great guy and the female lead candidates tried out by baking cookies. Apparently, Karen Allen is a good cook. Locals will recall that the Kansas City and Topeka Civil War Roundtables hosted Tom last year about this time. The topic was the fiction he wrote about ancestor William Clark, Massacre at Baxter Springs.
I haven't been to see Sex and the City yet. Can't take that much drama this soon!
Posted by Deb Goodrich at 7:46 AM

Hey Deb,
Congrats on the radio show! I have been listening online from Bartlesville, OK and it is great. It makes me feel like I am sitting at the Bean or Lola's having coffee with you looking over magazine articles or layouts like the old days! Can't wait to be on the show with you, it should be a right god hoot and holler of a good time!
Take care,
Michelle

What did you think of Indiana Jones? Have to say I didn't think much, though it wasn't in the Star Wars prequel league of letdown-badness. It just seemed to lack the certain something that the first one had. Didn't help that I was watching a documentary on Blade Runner just before, which remains Harrison's greatest non-Star Wars film and the third greatest Sci Fi film in history, IMHO (2001 is the other).

Made a post a couple of days about displaying the Southern Cross. What say you ?

James, I enjoyed Indiana Jones, but it was not as good as the first one. The first one, and maybe even the whole trilogy, took you to another place. I loved them!!!!

Si, posted on your site. That was a very thoughtful blog. I recommend everyone read it.