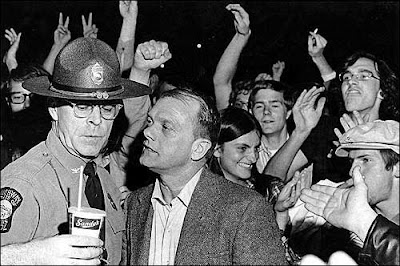 It has been an interesting week.
This morning, I interviewed via the phone, former Kansas Attorney General Vern Miller. In case you never heard of the General, he once raided an Amtrak train and arrested the folks for serving liquor. He jumped out of car trunks and surprised felons; he wrestled murderers and robbers. He is pictured above, second from left, in the midst of KU student protesters. While campaigning, Miller promised to "leap into the drug-ridden hippie communes of Lawrence with both feet." Truth is, he leapt into EVERYTHING with both feet. He earned his law degree while serving as sheriff of Sedgwick County and was in Topeka readying for the bar exam when the devastating tornado of 1966 struck the town. 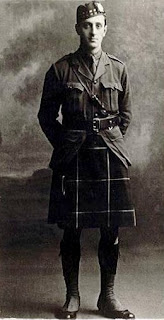 Today is the birthday of Basil Rathbone (left), born in South Africa in 1892. He served as a captain (intelligence officer) in the British Army and was cited for bravery. His younger brother died in the Great War.

In an interview with Edward R. Murrow in 1957, Rathbone related the story of how he disguised himself as a tree to get near the enemy camp to obtain information.

"I went to my commanding officer and I said that I thought we'd get a great deal more information from the enemy if we didn't fool around in the dark so much . . . and I asked him whether I could go out in daylight. I think he thought we were a little crazy. . . . I said we'd go out camouflaged -- made up as trees -- with branches sticking out of our heads and arms . . . . We brought back an awful lot of information, and a few prisoners, too." 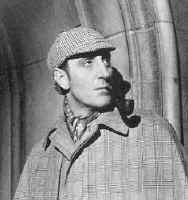 It just stands to reason that Sherlock Holmes would have been an intelligence officer. Don't you agree?

And by the way, what a beautiful man.

Great to see this! Indeed, Holmes would have been in M15 or M16, one suspects.

Incidentally, today is the birthday of Harry Patch, the last surviving British 'Tommy' to serve in the trenches in WWI.

Thanks for this photo ! Basil was superb .
cordially ,
David Corbett