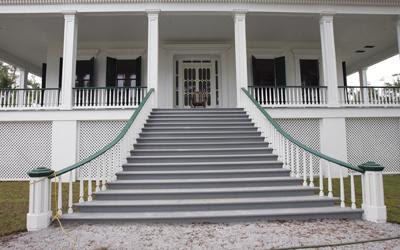 BILOXI - Bert Hayes-Davis stood on the porch at Beauvoir and phoned his wife, Carol, in Colorado Springs. Hurricane winds were picking up in the Gulf, and Hayes-Davis told his wife, "I hope a hurricane never hits it."He was the last member of the Davis family to stand on that porch, the last of the descendants of President Jefferson Davis to leave the ancestral home on the Mississippi Coast before Hurricane Katrina hit on Aug. 29, 2005.

Last Tuesday, June 3, the 200th anniversary of the birth of Jefferson Davis, his great-great-grandson, Bert Hayes-Davis, stood on the rebuilt porch and told a crowd of thousands, "We saw the worst. We've gotten the best. What a birthday present."Though much of the Coast was destroyed by Katrina, after the winds subsided and the waters receded, the house was still standing. The outbuildings were gone, the roof damaged, the porch blown away, many of the artifacts lost forever - but Beauvoir was still there. More than $4.5 million dollars later, and with the help of untold volunteer man-hours from people from all over the United States, the house stands restored, looking as it did the day Jefferson Davis left it for the last time in 1889.Beauvoir is again the jewel of the Coast.
Read the rest of this story, and the other articles in Gordon Cotton's series at the vicksburgpost.com.
(photo by Bill Haber * The Associated Press)
_______________________________________________________________
KMAJ Line-up for the Week (subject to change):
Listen in, y'all--1440 on your AM dial or online at 1440KMAJ.com, and call in with questions and comments: 785-297-1440, toll free 877-297-1440.
mon/june 9
8 Jerry Berger, candidate for DA
8:30/David Kehler, Butler Co. ext agent, wildflower/prairie tour
9 Open Lines
10 Judy Coder
10:30 Jim Hanni, AAA
tues/june 10
8 John Sellers, library of congress
8:30 Steve Baccus, pres. Kansas Farm Bureau
10 Nasa representative
10:15 Louis Kraft, actor, author on Errol Flynn & Olivia de Havilland
wed/june 11
8:30 Beth Cooper
9 Bill Kurtis/Michelle Martin, cookbook9:30
10 Cathy Duncan, Jayhawk Theater
10:30 Randy Floyd, hillbilly